Lockheed Martin, the security and protection technologies corporation, exhibited the strength of its Advanced Test High Energy Asset (ATHENA) laser weapon system by shooting a small truck in a current field test. In accordance with the company, the exhibition was the greatest energy ever reported by this type of laser weapon.

In the demonstration, the 30KWatt  fiber laser weapon managed to eliminate the truck’s engine. The objective of the test was to demonstrate the company’s inventions in building weapons technologies that’s more accurate.

“Fiber-optics lasers are revolutionizing direct energy systems,” Keoki Jackson, Lockheed Martin’s chief technology officer, said in a statement. “We are investing in every component of the system – from the optics and beam control to the laser itself – to drive size, weight, and power efficiencies.” 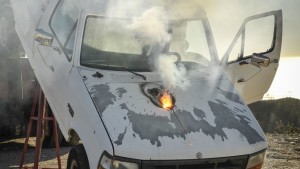 ATHENA is a ground-based prototype system. In the test, the laser burnt through the engine in a just a few seconds, after being fired from over a mile away.

Through the “spectral beam combining” technique, multiple fiber laser modules come together to establish a sole, high-quality beam that “provides greater efficiency and lethality than multiple individual 10-kilowatt lasers used in other systems.”

For Jackson, this demonstration shows signs of the kinds of defense technology that the company hopes to continue to develop.

“This test represents the next step to providing lightweight and rugged laser weapon systems for military, aircraft helicopters, ships and trucks,” he added.

The military is already testing laser weapons. The Office of Naval Research, for example, is building a laser weapon that will be able to shoot down aerial drones.