Innovative Chargers: Now this revolutionary furniture can charges your smartphone is about to arrive in your loungeroom and bedroom. A revolutionary range of lamps and bedside tables fitted with a wireless charging pad will be rolled out in Australia from October. The progressive scope of light lamps and bedside tables fitted with a remote charging feature will be released in Australia then could follow the world.

“We have been looking at people’s lives at home … and how that frustration can be reduced,” national commercial manager Tim Prevade said.

Users plug in the furniture pieces at a power source, then place their handset on a wireless charging station with a marked sign indicating where to rest the device. 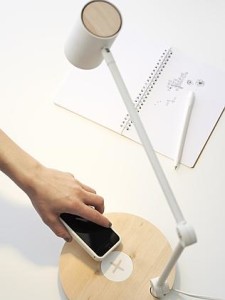 The products are expected to cost about $30 to $40 more than standard items.

Separate wireless chargers including one that slots into desks will also be sold. Futuristic furniture that recharges your smartphone.

Futuristic furniture that recharges your smartphone.

Mr Prevade said householders were keen to get rid of cable clutter.

The new furniture, with integrated Qi wireless charging, is compatible with phone models such as Samsung, HTC and Nokia, he said.

iPhone owners wanting to use it will be able to buy a special case for their handset.

Mr Prevade said the induction charging was similar to that for cooktops and electric toothbrushes.

“It’s more or less the same energy usage and time to charge batteries,” he said.

“It could potentially extend to other types of furniture, like couches.”

Australians have one of the world’s highest rates of smart phone usage with at least three in four adults using a handset to access the web.

Some hi-tech homes had more than 20 devices, often used simultaneously.

Previous Saudi Arabia beat India Becomes largest defence market for US
Next Over 700,000 US Vehicles Recalled for Defective ignition