Future Indices for Europe and US markets register a drop

The latest employment report from the US impacted stock markets across the world. The futures market saw a drop in the equity index for Europe and Asia. Share prices for American companies as well as the treasuries saw a downturn. The economic outlook for Japan was also revised. There was a fluctuation in the price of copper while the Pound recovered some ground after the initial drop.

The Euro Stoxx index saw a 0.6% drop and the US futures saw a 0.1% drop. Similarly, the index for the Asia pacific region dropped 0.9%. There was a four basis point rise for the ten-year bonds issued by Japanese companies, while the American Treasury recorded its lowest price this year. The British pound recorded 0.2% rise while the Euro registered its highest price against the dollar in eleven years. This was on the back of the bond purchase initiated by the European Central Bank. However, there was a constant fluctuation in the prices related to copper and oil.

A bigger-than-projected increase in U.S. payrolls and surging Chinese exports to America underscored how the world’s largest economy is diverging from others as the Federal Reserve ponders when to begin raising interest rates. The odds of a U.S. rate increase by September jumped to 60 percent, from 49 percent on Thursday, futures showed. Data Monday signaled Japan’s rebound from recession was weaker than expected. 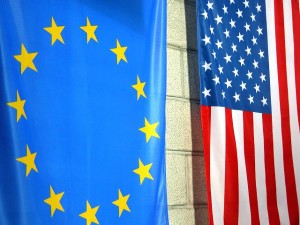 “The market’s response to the much-awaited U.S. payrolls report was abrupt,” Kymberly Martin, a markets strategist in Wellington at Bank of New Zealand Ltd., said in a note to clients. “This will provide sufficient ammunition for the Fed to remove patience from their statement at the next meeting and undertake an initial rate hike in June.”

Futures are signaling that European shares will retreat after the region’s benchmark index capped a fifth straight week of gains, the longest streak since June. The Stoxx Europe 600 Index closed at its highest level since July 2007, as the European Central Bank said it would start its asset-purchase program today. President Mario Draghi said the stimulus will spur the euro area’s fastest economic growth since 2007 and return inflation to the ECB’s goal within three years.

The Topix dropped 0.6 percent in Tokyo, declining from its highest close since December 2007. Japanese gross domestic product expanded an annualized 1.5 percent in the fourth quarter, from the previous three months, down from a preliminary reading for 2.2 percent growth.

Hong Kong’s Hang Seng Index swung between gains and losses and a gauge of Chinese shares in the city erased a decline to add 0.7 percent. The Shanghai Composite Index was 1.9 percent higher as banks rallied after the nation’s securities regulator said it may give brokerage licenses to lenders and the government said it will allow regional authorities to convert some high-yielding debt into municipal bonds in a bid to cut financing costs.

Benchmark U.S. stock gauges slumped more than 1 percent on Friday, with the Standard & Poor’s 500 Index dropping the most since Jan. 5 after the jobs data. The Bloomberg Dollar Spot Index, which tracks the greenback against 10 major peers, was little changed Monday after surging 1.2 percent on Friday to the strongest level since its 2004 inception, the measure’s biggest one-day jump since November 2011.

The Fed, which is set to review policy March 18, has pledged this year to be “patient” on increasing benchmark borrowing costs as the American recovery gathers pace. Federal Reserve Chair Janet Yellen has said the timing of any rate rise will depend on economic data. The prospect of higher U.S. rates has seen the dollar outperform most global peers in 2015.

Greece’s anti-austerity government raised the prospect of a referendum if creditors insist on policies that aren’t acceptable to the government. The list of measures Greece’s government sent to euro region finance ministers last Friday is “far” from complete and the country probably won’t receive an aid disbursement this month, Eurogroup chairman Jeroen Dijsselbloem said on Sunday.

Exports from China rose 15 percent in the January-February period, surpassing the government’s 6 percent goal for all of 2015. Imports slid a more-than-estimated 20.5 percent in February, capping a fourth straight month of contraction and signaling ongoing weakness in domestic demand.

The yield on China’s sovereign bonds due September 2024 rose four basis points, or 0.04 percentage point, to 3.54 percent, according to National Interbank Funding Center prices. That’s the highest level since Jan. 15.

China lowered its 2015 economic growth target last week to 7 percent, the slowest pace since 1990, just days after the People’s Bank of China cut interest rates for the second time in three months. The PBOC cut the currency’s reference rate today to the lowest since Nov. 7.

Copper rebounded from its lowest in almost two weeks after data Sunday showed imports of the metal by China, which accounts for almost half the world’s consumption, fell by the most in four years. The metal for three month delivery on the London Metal Exchange climbed 0.4 percent to $5,768 a tonne.

Brent crude dropped 0.3 percent to $59.55 a barrel, following its steepest weekly decline since the start of January. West Texas Intermediate oil was little changed at $49.62 a barrel after sliding 2.3 percent on Friday.

The dollar’s post-payrolls advance damped the investment appeal of commodities. The Bloomberg Commodity Index slid 0.3 percent to the lowest level since Jan. 29 after a 0.9 percent drop on Friday.

Futures on wheat, corn and soybeans advanced at least 0.6 percent. Gold for immediate delivery was up 0.4 percent at $1,172.26 an ounce, clawing back some of last week’s 3.8 percent drop.

“Investors are looking and focusing entirely on what the Federal Reserve will do in the coming months,” Chad Morganlander, a money manager at Stifel, Nicolaus & Co., which oversees about $170 billion, said by phone on Friday. “Effectively good news in this data point supports the notion that they will raise rates in the not-too-distant future.”

The Fed has kept its benchmark, the target for overnight loans between banks, in a range of zero to 0.25 percent since December 2008 to support the economy. Most central-bank officials expect to raise rates this year, according to projections released in December. A number said since then an increase around mid-year was possible. 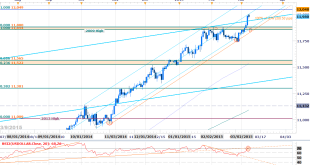 The US Dollar continue to strengthen with 12 year high against Euro and Yen. The skittish mood …