A $200,000 Italian sports car Lamborghini was found abandoned and discarded on a shoulder by an unidentified owner on a sidewalk of Dallas Texas highway on March 8 evening.

The first responding officer of Dallas Texas highway patrol to the scene said the front right wheel and bumper of the yellow Lamborghini has been damaged heavily and this may be the reason the driver left it hanging on the side road.

Valley Central found no identification inside the car and after verifying found it was rented by an unnamed person.

It is assumed the car may have been on the road at a very high speed and hence miscalculated the driving skill, ditching it on the shoulder and slamming front right side into a barrier.

The Dallas highway patrol have towed the supercar out of the highway and impound it in their area for further investigation and retrieval of the car by the rental company. 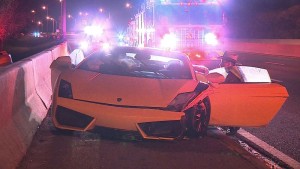 Lamborghini is an Italian made luxury sports car owned by the Volkswagen Group through its subsidiary brand Audi. It was founded by Ferruccio Lamborghini in 1963 to compete with other existing super car builders such as Ferrari.

By the 1978, due to financial issue, Lamborghini declared bankruptcy. It was acquired by Chrysler on the same year but was released to the Volkswagen group in 1987 and was placed under Audi.

Lamborghini is currently producing the V12 supercar Aventador and the V10 powered Huracan.

Aside from building supercars, they are also making V12 engines for offshore powerboat racing.