The US Dollar continue to strengthen with 12 year high against Euro and Yen. The skittish mood spread to Asian stocks as MSCI’s broadest index of Asia-Pacific shares outside Japan .MIAPJ0000PUS slipped 0.6 percent.

Driving the dollar was speculation the Federal Reserve would start lifting interest rates from mid-year, while central banks in the European Union and Japan were busy easing policy by buying billions in government bonds.

The European Central Bank began its trillion-euro bond buying campaign on Monday, nudging down yields in Germany and other core EU sovereigns.

Selling in the euro gathered pace through the Asian session as a break of $1.0822 EUR= triggered stop-loss offers and took it to $1.0785, the lowest since September 2003. Bears are now eyeing a major layer of chart support at $1.0762.

The dollar also broke higher on the yen to reach 122.02 JPY=, territory not visited since July 2007. 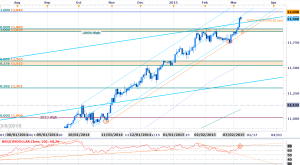 The prospect of rising U.S. yields was threatening to attract funds from emerging markets, causing strains from Brazil to Turkey. The Brazilian BRL= real led the rout, having fallen for the sixth straight session on Monday.

The New Zealand dollar took a spill after police announced threats had been made to poison baby formula from the country’s milk producers. Dairy is New Zealand’s biggest export earner and any hint of trouble for the industry hurts the currency.

The volatility in currencies overshadowed data from China that showed consumer prices topped expectations with an annual rise of 1.4 percent in February, although much of the pick up was caused by seasonal volatility in food prices. ECONCN

Producer prices continued to slide, underscoring deepening weakness in the economy and intensifying pressure on policymakers to find new ways to support growth.

Shanghai shares .SSEC eased 0.1 percent, but that merely unwound a little of the gain made on Monday.

Japan’s Nikkei .N225 initially firmed on the lower yen, only to drift down 0.4 percent as the investor mood darkened.

Most commodities continued to struggle with the strength of the U.S. dollar. Gold XAU= fell to a three-month low around $1,159.20 an ounce, while copper futures CMCU3 lost 0.5 percent.

On its 10th birthday, The MRO sends stunning images of an ancient lake on the Mars