BMW hybrid cars first to feature Apple Watch apps, Every time Apple inc launches a new product, technology buffs all around the globe scramble to find out what new twist will the electronic giant come up with next. The latest being the Apple Watch which was unveiled recently and is said to be priced anywhere between Rs 22,000 to a staggering sum of Rs 10 lakh. And, since the time this wearable device has been brought to public eye, petrol-heads around the world are wondering which car brand will be the first to incorporate the Apple Watch in their model range. 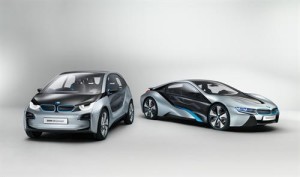 The buzz online is that the German luxury car maker, BMW, could be the first car manufacturer to make their in-car i Remote app compatible to Apple Watch in their state-of-the-art BMW i3 electric vehicle and the BMW i8 hybrid. This makes it even more interesting for Indian car enthusiasts and Apple aficionados as the BMW i8 was launched in India last month at an equally impressive price of Rs 2.29 crore (ex-showroom Mumbai).

BMW i Remote car app allows BMW i3 and i8 owner to monitor their car’s battery level, range and even locate nearby charging stations via iPhone and Android smart phones. Using the app they can also check if the doors, windows and bootlid of the car are locked or not. Besides, owners get full control of the car’s air-conditioning, so that one can set the cabin’s temperature as required, even before getting into the car.

Apple, on the other hand, already has its CarPlay infotainment system in place and has announced that it will be offered on 40 different models this year. And no surprises here, as the list for this also includes BMW.