KFC: Kentucky fried chicken the biggest chain of fried chicken restaurants, is feeling the pressure from environmental groups and consumer to change how its poultry are produced after McDonald’s Corp said it would switch to chicken raised without human antibiotics. 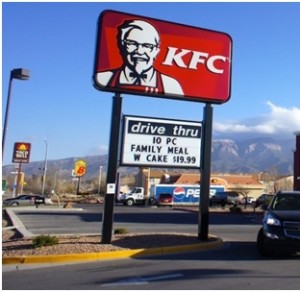 KFC under pressure from MCD’s

McDonald’s will not be involved in chicken raised with antibiotics that are vital to human health over two years of concern that use of the drugs in meat production has worsen the rise of deadly “superbugs” that resist treatment. Retailer Costco Wholesale Corp told Reuters it aims to eliminate the sale of chicken and meat produced with human antibiotics.

KFC resturant are owned and operated by Louisville, Kentucky based Yum Brands , which has not yet stated policy on antibiotic use in the production raw and flesh meat it buy. “Chick-fil-A resturant” another chicken restaurant chain that competes with KFC, says about 25 per cent of the chicken it serves is raised without any antibiotics,and all of it’s suply chain will be covered by 2020.

Groups like the Natural Resources Defense Council believe this is a step in the right direction that could also set a good example for other meat and poultry producers. Given this company’s huge purchasing power and iconic brand stated about the news, director of the Natural Resources Defense Council’s Food and Agriculture program. we may be at a overturn point for better antibiotic stewardship in the poultry industry Hopefully.

Germany gets threatened by Greece over asset seizure