OECD believes there was a Global Economic Growth in 2014

OECD: Global economy grew at a slightly faster pace in 2014, as a modest revival in the eurozone and a pickup in India helped offset slowdowns in China and Japan.

The Organization for Economic Cooperation and Development Wednesday said the combined gross domestic output of the Group of 20 largest economies expanded 3.4% last year, up slightly from 3.2% in 2013. The G-20 accounts for about 90% of global economic output. 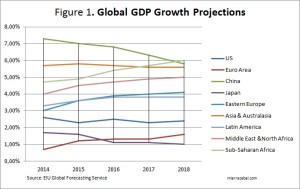 That pickup was aided by a return to growth in the eurozone, where economic output rose 0.9%, having contracted by 0.5% in 2013. Economic growth in the U.S. was little changed, while China’s rate of expansion slowed to 7.4% from 7.7%.

It was another disappointing year for the global economy, which has struggled to recover from the effects of the 2008 financial crisis and the recession that followed.

This year isn’t expected to be much better, with the eurozone and Japan struggling to strengthen their weak recoveries, China showing signs of a further slowdown, and Russia and Brazil also faltering.

In January, the International Monetary Funddowngraded its outlook for more than a dozen of the world’s largest economies. The fund said global growth would be 0.3 percentage point lower this year and next than it had previously expected. It now expects the world economy to expand 3.5% this year and 3.7% in 2016.

Weaker-than-expected growth has been reflected in falling oil prices, which in turn have pushed inflation rates lower. Central banks have responded with a new wave of stimulus measures.

The People’s Bank of Chinacut its benchmark lending and deposit rates in February, less than four months after the previous reduction.

That followed the announcement of a new program of quantitative easing by the European Central Bank in late January, which it launched Monday. The Reserve Bank of India has cut its benchmark interest rate twice in 2015, and there have been a series of easing moves by smaller central banks around the world.

The Bank of Thailand became the latest to ease Wednesday, surprising investors and traders by cutting its benchmark interest rate to 1.75% from 2.0%.

The OECD said that economic growth was unchanged in the final three months of 2014, with G-20 output rising 0.9% from the three months through September.

New Jersey not the best state for public pension funding