Illinois Man was Saved by a Hot Sauce from Cancer

The fresh report says, A Illinois man tasted a hot sauce at a local retailer shop. Suddenly, the guy was in seizure. They took him in the hospital and found out about the tumor.

A 30-year-old Illinois man attributes his survival from a cancerous brain tumor to Pepper Palace’s “Flashbang” sauce because doctors detected the dangerous tumor after a taste of the spicy stuff sent him to the hospital during a vacation last August, the Chicago Tribune reported. 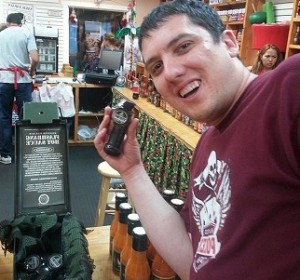 Randy Schmitz, a special education job coach from Orland Park outside Chicago, took a toothpick sample of the concoction that includes the Jolokia or “ghost” pepper in the retailer’s Myrtle Beach, S.C., store, according to the publication.

But just as Schmitz’s sister was about to try the sauce that the company sells inside novelty grenades, Schmitz told her he didn’t feel well and sat on a bench outside the shop, where he suffered a seizure. Doctors in the emergency room discovered the tumor when they performed an MRI and told the baffled Schmitz that the hot sauce with four fiery peppers had sparked the seizure, he wrote in an email to the company that’s now posted on its website.

“The doctors did not know how long the cancerous tumor had been there and they said if it did not get activated, it would have just kept growing and expanding,” Schmitz wrote. “I had surgery, got the tumor removed, went on radiation and chemotherapy, and I am now cancer free!! Your Flashbang Pepper Sauce SAVED MY LIFE!!!!”

Lack of Sleep can cause Rise in Blood Pressure, say Study