According to the recent report from the Journal of the American Medical Association Pediatrics publication, all fingers will point to the anti-vaccination movement for the recent messle outbreak in Disneyland. 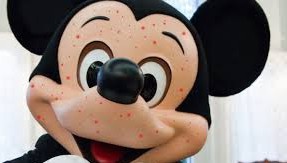 “The ongoing measles outbreak linked to the Disneyland Resort in Anaheim, California, shines a glaring spotlight on our nation’s growing anti- vaccination movement and the prevalence of vaccination-hesitant parents,” the scientists wrote in the research paper. The scientists relied on publicly available statistics to draw their conclusions, they said.

“Rapid growth of cases across the United States indicates that a substantial percentage of the exposed population may be susceptible to infection due to lack of, or incomplete, vaccination,” the researchers wrote.

“Our study estimates that MMR vaccination rates among the exposed population in which secondary cases have occurred might be as low as 50 percent and likely no higher than 86 percent,” the researchers wrote.

“Given the highly contagious nature of measles, vaccination rates of 96 percent to 99 percent are necessary to preserve herd immunity and prevent future outbreaks.”

The low vaccination rates are “placing the greater population at risk as well” as those who come into immediate contact with an infected person, according to the researchers.

Dr. Eric Handler, Orange County’s health officer, noted there were 35 confirmed cases of measles in the county. Of those, 14 were children and 13 of them did not get shots. In 22 cases, the sick acquired the disease in the community and 13 were thought to have been infected at Disneyland since Dec. 17, Handler said.

There are 133 cases of measles in the state, the latest being reported Friday out of Ventura County.

The most recent figures show 33 cases in Los Angeles County, eight in Riverside County, 12 in San Bernardino County and 14 in San Diego County.

Of the California cases, 40 were traced back to visitors or workers at Disneyland between Dec. 17-20, according to the state.

In 30 cases, measles was passed on from someone in the house or another close relation, officials said.

Eleven people contracted the disease in a community setting such as an emergency room where someone was seeking treatment for measles.

In 49 cases, including the latest one, it’s unknown how the disease was contracted.

Of the patients the state has vaccination records for, 57 did not get shots and 20 had one or more doses of the MMR vaccine, according to the state.

The outbreaks in Illinois, Washington state and Nevada are unrelated to Disneyland, according to the CDC.

From Dec. 28 to March 6, 142 people from seven states came down with measles from the Disneyland outbreak. The states include Arizona, California, Colorado, Nebraska, Oregon, Utah and Washington state, according to the CDC.

There were 644 measles cases in 27 states, the most since measles was declared eliminated in the U.S. in 2000, according to the CDC.

In most cases, the victims were unvaccinated, according to the CDC.

The CDC reported on Feb. 13 when there were 110 cases of measles, 45 percent were unvaccinated, 5 percent had one dose and 6 percent had two doses and only one person had three doses.

Twelve of those afflicted with measles were too young to get shots, and of those who were eligible to get shots, 28 intentionally took a pass based on personal beliefs and one had an “alternative plan” for immunization, according to the CDC.

The 28 who did not get vaccinated were 18 children and 10 adults, according to the CDC.

The patients have ranged in age from six weeks to 70 years, with the median age 22, according to the CDC.

Experts suspect the outbreak started with a traveler who got infected overseas and then visited Disneyland while infectious, according to the CDC. Scientists say the measles virus in this outbreak matches the one in an outbreak in the Philippines last year.