German stocks surged to a new high, but investors not concerned

On Monday, German stocks rose to a record high while investors shrugged off a bounce by the euro and pays attention on the anticipated boost to corporate earnings coming from a slump. 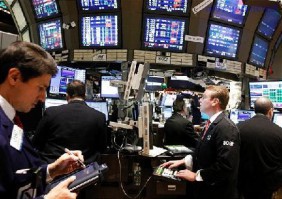 The DAX powered above 12,000 points for the first time and the main pan-euro zone benchmark indices hit seven-year highs, while U.S. futures pointed to a higher open on Wall Street of around 0.5 percent ESc1.

Any U.S. gains are likely to lag Europe’s, an indication that investors fear U.S. corporate earnings will feel the pinch from the dollar’s recent strength. Investors are also bracing for the Federal Reserve’s policy decision on Wednesday.

“As the steroid injection of ECB QE continues to swell the DAX, as well as the other euro zone indices, investors remain enthralled with the region and seem committed to continuing its upswing,” said Spreadex financial analyst Connor Campbell.

The European Central Bank last week started its 1.1 trillion-euro bond-buying “quantitative easing” programme, which has helped drag down bond yields to new lows and with them the euro.

The euro has lost roughly a quarter of its value against the dollar since mid-2014 and suffered its biggest weekly fall since September 2011 last week, shedding 3.2 percent as the ECB began its QE scheme.

The CSI300 index .CSI300 and the Shanghai Composite Index .SSEC both rose more than 2 percent after Premier Li Keqiang said Beijing had scope to adjust policies to help boost the world’s second-largest economy.

Recent weak U.S. inflation and retail sales data have not derailed expectations that the Fed will tighten monetary policy. Expectations that higher rates and a stronger dollar will hit U.S. corporate profits have dragged on shares.

Many observers expect the Fed to remove its pledge to remain “patient” about raising rates for the first time since 2006. Economists polled by Reuters split almost evenly on whether a first increase will come in June or later in the year.

“We expect the Fed to end forward guidance by dropping the ‘patience’ language in favor of language that highlights that the economic outlook warrants a gradual removal of policy accommodation,” said Barclays economists in a note.

“While such an outcome does not necessarily mean that the first rate hike will come in June, (we) think the outlook for employment and activity is robust enough to warrant it.”

Oil prices continued to tumble, with U.S. crude dropping more than 2 percent at one point to a six-year low on expectations of oversupply. The International Energy Agency said on Friday a global glut of oil is growing and U.S. production shows no sign of slowing.

After snapping its longest daily losing streak since 1973 on Friday with a first rise in 10 sessions, gold resumed its fall, trading down 0.2 percent at $1,155 an ounce XAU=.

Previous Lack of Sleep can cause Rise in Blood Pressure, say Study
Next EBay & Sotheby’s collaborate for a New Live Auction Experience