Number of Newborn deaths can be decreased with clean water

Every year million of babies die due to poor sanitation, but this can be prevented. The ratio will go down to one in five newborns deaths if safe water is accessible. 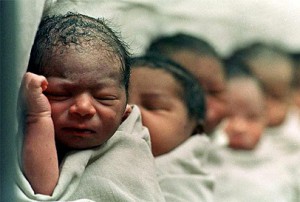 Half a million babies die each year in their first month of life because they’re born in unhygienic conditions, the London-based group said, citing a lack of clean water, washed hands and basic sanitation for newborns in developing nations.

“The links between dirty hands, dirty water and infant mortality have been known for over 150 years so this is not a solution waiting for an answer but an injustice waiting for action,” WaterAid Chief Executive Officer Barbara Frost said in a statement. “Being born into unhygienic conditions condemns too many babies in the developing world to a tragically early and avoidable death and their parents to needless heartbreak.”

WaterAid’s paper accompanies a new World Health Organization and United Nations Children’s Fund report showing that 38 percent of hospitals and clinics in 54 low- and middle-income countries lack access to any water source. Nineteen percent don’t have any toilet facilities and 35 percent have no place for staff or patients to wash hands with soap, the report said.

As few as 20 percent of health-care facilities in the West African nation of Mali had a water source near or at the site, the WHO report said. Water supplies may be a half-kilometer (0.3 mile) from the facility rather than piped into the premises.

“Nearly 40 percent of health-care facilities do not have any source of water, suggesting that patients seeking treatment fall ill, or potentially die, for the lack of the most basic elements of a safe and clean environment,” said Maria Neria, WHO’s director for public health.

Previous Worker sues McDonald for getting burn on the job
Next Himalayan Yeti is species of brown bear: Study