Breaking News
Home / Business / Luxembourg in the middle of dilemma, the end of bank secrecy

Luxembourg in the middle of dilemma, the end of bank secrecy

It can be remembered that Luxembourg comes from rags to riches less than a century ago.   However, like the old saying “what goes up must come down”, and now it crumbles. 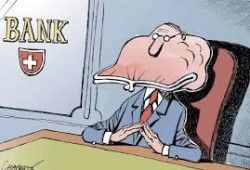 The country transformed itself from a rural economy into the European Union’s richest in less than a century by swapping fields and steel mills for hedge funds and multinationals. That model may now be at risk from regulatory clampdowns, first on banking secrecy and now on the tax accords that helped bring the profits of giant companies such as Amazon.com Inc. to the Grand Duchy.

EU lawmakers last month agreed to create a special committee to probe fiscal agreements across the region and curb tax evasion. The move was driven in part by the leak of hundreds of documents at the end of 2014, the so-called LuxLeaks papers, that showed some companies effectively lowered their tax burden to less than 1 percent of profit by making deals with authorities in Luxembourg, a nation of 550,000 people that borders Germany, France and Belgium.

“They’re scrambling to save what’s left of their tax-haven status, that’s quite obvious,” said Philippe Lamberts, a Belgian lawmaker who sits on the panel, which held its first meeting in Strasbourg, France on March 9. “They’ve seen the impact of the end of bank secrecy, now they know that what’s left is corporate tax.”

Shifting profits into low-tax locales helps U.S. companies alone to avoid at least $130 billion a year in taxes around the world, according to Gabriel Zucman, an economist at the London School of Economics.

Now, Europe’s authorities have those practices in their sights. Corporate tax dodging has climbed to the top of the EU agenda, two years after the Organization for Economic Cooperation and Development promised a new set of guidelines for closing loopholes.

The European Commission is probing whether some low-tax deals are illegal state subsidies and is due to announce initial steps in Brussels on Wednesday toward legislation on greater fiscal transparency.

That means Luxembourg’s arrangement with Amazon — which employs about 1,000 people in the country — is under close scrutiny.

So are others, as the list of tax investigations expands across the 28-nation bloc. EU competition regulators have cast doubts on the legality of Ireland’s deal with Apple Inc. and a Dutch accord with Starbucks Corp. The companies have all said they acted within the rules.

Luxembourg is getting special attention because of LuxLeaks — thousands of pages of tax-accord details, published by the International Consortium of Investigative Journalists. Luxembourg’s Finance Minister Pierre Gramegna described it as a “tsunami.”

The commission, the EU’s executive arm, is currently headed by one of Luxembourg’s own. Jean-Claude Juncker took over as president in November after almost 19 years in charge of the Grand Duchy, when many of the deals now under scrutiny were arranged. Yet Juncker has voiced support for a tax-law overhaul that threatens Luxembourg’s livelihood.

Unlike the OECD, the commission has the power to order governments to claw back subsidies given to companies, if it decides that they were unfairly granted tax breaks.

The EU probe has already issued a preliminary finding that the accord with Amazon, and another pact with a unit of carmaker Fiat SpA, violates the bloc’s rules on state aid for business.

The regulator told Luxembourg that its “cosmetic” agreement with Amazon, reached in just 11 days, potentially allowed the company to shift billions of euros to a tax-free unit, according to a letter it released in January.

“Yes, I flew 12 hours to go visit a company, and well done to me — it’s a positive thing,” Frieden, who left office at the end of that year and now works for Deutsche Bank in London, said in an interview. He said such efforts weren’t unique in the EU: “The U.K., the Netherlands and Ireland were very active in trying to attract other companies.”

Frieden said that while the 5,000-mile mission was partly aimed at reassuring Amazon over the OECD’s corporate-tax guidelines, “it’s totally wrong to say I only went to see Amazon because of the OECD talks.”

Prime Minister Xavier Bettel, 42, promised in December to clean up his nation’s “damaged image.” His government pushed through laws to regulate tax agreements and on Jan. 1 ended a practice of offering bank secrecy in favor of a system that automatically exchanges tax information.

He’s also continued the tradition of reaching out to multinational corporations overseas. Bettel toured the U.S. last month, meeting executives at Amazon, EBay Inc. and its PayPal unit, which have their EU bases in Luxembourg, according to Paul Konsbruck, his spokesman. He also saw Twitter Inc.

Drew Herdener, a spokesman for Amazon in the Grand Duchy, declined to give details about the visits, as did EBay.

Wednesday’s proposals from the commission include measures that would require an automatic exchange of information about tax deals that member-governments offer to companies.

Radical changes to EU rules require unanimous approval from each of the bloc’s 28 nations — making it hard to get agreement.

Come what may, the Grand Duchy will adapt, said Yves Kuhn, chief investment officer at Banque Internationale a Luxembourg. Its inhabitants enjoy the EU’s highest income per person, more than double Germany’s at about $80,000 in 2013.

“What Luxembourg has shown in the last 30 to 40 years is that it continuously redefined itself, reinvented itself, to remain top,” Kuhn said.

Frieden, the former finance chief, evoked the country’s less prosperous past to explain his drive to cultivate corporations.

“I didn’t want Luxembourg to become an agricultural state,” he said.

_ With assistance from Eshe Nelson and Paul Dobson in London, Jim Brunsden, Ian Wishart and Gaspard Sebag in Brussels and Jesse Drucker in Rome.

Previous Contrary to name, Diet in Diet Soda is not true, Study say
Next Companies joined forces to give best experience for shoppers