Based on the data of NASA’s Gravity Recovery and Interior Laboratory (GRAIL) researchers at Purdue University have discovered an undetected, widest crater on the Moon. 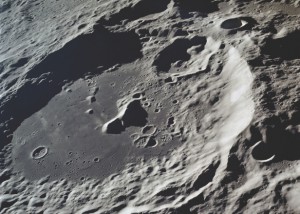 The team have informally dubbed the crater Earhart, after aviation pioneer Amelia Earhart, who was a career counselor and advisor to the Department of Aeronautics at Purdue from 1935 to 1937. Today, Purdue houses the biggest trove of Earhart-related material, including papers associated with her solo flight across the Atlantic in 1932 and with her final, doomed attempt at a flight round the world in 1937. The crater’s name will need to be vetted by the International Astronomical Union.

Although the newly recognized crater is 124 miles in diameter, it could be detected only through the gravity measurements taken by the GRAIL mission; most of the crater is entombed under the lunar surface. The discovery of the crater was serendipity; the team was employing a method to sharpen the gravity maps created by GRAIL to discern small-scale surface topography.

The technique instead revealed an unidentified circular feature. At first, the team interpreted it as a small crater, but as they zoomed out and modeled the feature in accordance with the gravity data, they realized that the crater was vast. The team intends to apply their method to the whole surface of the Moon to search for other buried structures.

“This is one of the biggest craters on the Moon, but no one knew it was there,” Melosh said. “Craters are named after explorers or scientists, and Amelia Earhart had not yet received this honor. She attempted a flight around the world, and we thought she deserved to make it all the way to the Moon for inspiring so many future explorers and astronauts.”