Archaeologists claim study of 17 million year old whale fossil has thrown new lights on knowing where humanity was born on this earth. 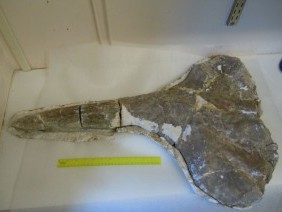 The fossil, which takes the form of the beaked skull of a Ziphiidae whale, is tied to East Africa, a region at one time that had been wreathed in dense forests. Researchers have been trying for a long time to understand when these forested lowlands rose up to the arid, savannah-like plateau that it is now; with the slow demise of these forests it’s thought that early human ancestors had to come down from the dwindling trees and begin walking upright.

However, when the plateau lifted up has been unknown. The discovery of the whale fossil may be able to help pinpoint that date according to the study, with researchers now believing that it occurred somewhere between 17 million years ago and 13.2 million years in the past.

Believe it or not, the whale skull isn’t a new discovery. Originally discovered in 1964, it laid unexamined until 1974, when an initial study was published on it. At that point the skull fell into disuse due to being misplaced – until 2011.

The fossil itself is the oldest specimen of a beaked whale, which are of course found deep in ocean waters. However, since the fossil was found more than 450 miles inland and more than 2,000 feet high up on the East African plateau, researchers were scratching their heads as to how exactly the whale found itself so far from the coast.

Scientists thought that the whale, which would have been around 23 feet long when alive, had wandered from the Indian Ocean and found its way upriver that led deep into the modern location of Kenya. The possibility exists that it eventually came to rest in a former system of rivers based on the sedimentary layers the fossil was found in.

Once the fossil was rediscovered, the new team of researchers were able to date the uplift of the East African plateau based on the fact that modern whales periodically find their way into rivers around the world; killer whales regularly visit the Pacific Northwest of the US by swimming into the Columbia River, and a much-publicized event in 2006 saw a whale strand itself in the Thames River.

Out and Out Complicated, Independent Vermont Sen. Sanders is showing face in New Hampshire’s Democratic primary