Experts think 2015 Allergy Season could be harsher than before

Spring time is here along with some seasonal allergies. Experts believe that the 2015 allergy season could be worse than the previous year, but the season will be much shorter. 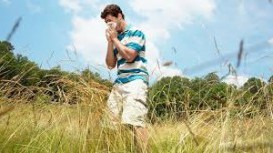 When plants and trees begin to bloom, pollen is let loose into the air, which affects millions of people. The most common seasonal allergy is rhinitis or hay fever, which is cause by pollen from grasses, trees and weed. About 35 million Americans are affected with hay fever yearly.

This year, people who are allergic should prepare themselves well for prickly eyes, runny nose and sneezing. Experts suggest that even though the allergy season could be worse than previous years, the season is anticipated to be a little shorter than normal.

Dr. Tanya Laidlaw, director of Translational Research in Allergy at Brigham and Women’s Hospital, believes that the classic oak, birch and maple that are responsible for many spring allergy symptoms will pollinate later than normal this year. This late pollination will discontinue allergies by a few days or a week.

Dr. Laidlaw also explains that the wet winter months are responsible for the arrival of possibly the worst allergy season that people could experience.

“The trees are really primed for a heavy pollen season so we expect that the pollen counts will be as high, if not higher than usual,” Laidlaw said. “The days of symptoms might actually be more severe,” added Dr. Laidlaw.

Dr. Clifford Bassett, medical director and founder of Allergy and Asthma Care of New York, suggests that global warming and its result on the weather are important factors in allergy seasons being intense, as seen in the past few years. The trend could continue this year as well.

Increased carbon dioxide and climate changes result in the growth of pollen, which is bad news for allergy sufferers.

“With this carbon dioxide prevalence, we think certain pollens will be more prevalent and more potent, which is a very major factor,” said Dr. Bassett.

Some experts also tell people to avoid opening windows at home and in cars; to use air conditioning instead to escape pollen allergy; and to avoid going outdoors for long periods of time. However, with the pleasant weather, people may also want to go out and enjoy the season.

Previous Tag Heuer planning to launch a Smartwatch with Intel’s help
Next In north Carolina, Crocodile came first before Dinosaurs