Sony Corporation launched its Vue streaming TV service in select markets on its PlayStation for a monthly subscription of $50 for 53 channels including NBC, Fox and CBS. 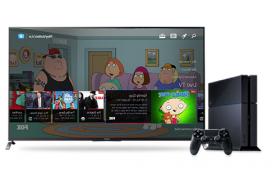 Not participating in Sony Vue, however, are Disney’s ABC and ESPN. Dish’s competing $20-per-month Sling TV does include those networks.

Sony first announced Vue last November, debuting in a limited invite-only beta. Thursday’s more formal launch brings it to PlayStation 3 and PlayStation 4 consoles in New York, Chicago and Philadelphia, with more markets scheduled to come later this year. Support for Apple’s iPad with a dedicated app is also said to be coming soon, but Sony hasn’t given a launch timeframe.

Vue features both live TV and cloud VR functions. The full lineup of channels is:

CBS – At launch, PlayStation Vue will offer the CBS Television Network’s live linear signal in its owned-and-operated markets. On-demand prime-time programming will be available as well.

Vue is yet another option for so-called cable cutters, looking to gain access to live television broadcasts through providers other than traditional cable companies. Apple is said to be planning its own streaming service, which could launch as soon as September.

Apple’s streaming service is rumored to cost between $30 and $40 per month, and the company is said to be in talks for deal with a number of major partners, including ABC, CBS, and Fox. Absent is said to be NBCUniversal, which is owned by Comcast, though the government could force Comcast to broker a deal.

Just days prior to the launch of HTC M9, CEO Peter Chou steps down from …