Total eclipse witnessed by Millions in Europe at 9:41 GMT

Millions of skywatchers in UK and northern Europe witnessed the best and rare solar eclipse today. The totality reached at 09:41 GMT. 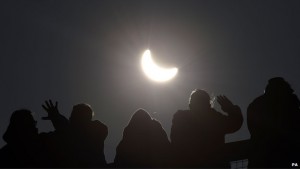 As the Sun emerges from behind the Moon, people are still advised not to look directly at the phenomenon.

This is because even during the eclipse, looking directly at the Sun causes serious harm – but there are ways to watch the eclipse safelyand many people have taken the chance to do so.

In all parts of the UK the eclipse reached at least 83% and the darkness peaked at about 09:35 GMT.

Actual viewing opportunities were heavily dependent on the cloud cover that shrouded much of the country.

The deep shadow formed first in the North Atlantic, before sweeping up into the Arctic Circle and ending at the North Pole.

The UK will not see a solar eclipse on this scale again until 2026.

The exact moment of greatest darkness for UK skywatchers was dependent on their location.

Penzance, in Cornwall, for example, had this moment at 09:23 GMT, whereas for Lerwick in the Shetland Islands, it happened at 09:43 GMT.

For the Shetlands, the eclipse was very nearly total at 97%.

To experience totality required going further north still – such as the trip taken by a BBC camera operator above the clouds in the Faroes.

The period of greatest darkness – nearly three minutes – occurred over a spot in the Norwegian Sea, a little below the Arctic Circle, at 09:46 GMT.

Many professional and amateur astronomers positioned themselves in the Faroe Islands, where the capital city of Torshavn got totality for a full two minutes, beginning just before 09:41 GMT.

And those who could not book a flight or a hotel for the Faroes went to Svalbard, where the capital city of Longyearbyen witnessed two-and-a-half minutes of totality, starting shortly after 10:10 GMT.

Elon Musk, CEO of SpaceX, has posted a video of the inverted rocket Falcon 9 …