The Rosetta satellite’s Comet 67P is learned to be spinning down gradually. European observers have noticed it is extending by about a second a day. 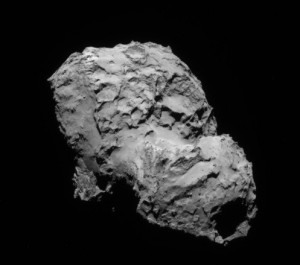 “The gas jets coming out of the comet – they are acting like thrusters and are slowing down the comet,” said flight director Andrea Accomazzo.

The Space Agency official of Europe was speaking this week at the Royal Aeronautical Society in London.

He was describing how his team has learnt to fly Rosetta around the 10-billion-tonne, 4km-wide body with remarkable precision.

Navigators use a system of landmarks on the comet to understand how it is rotating and moving through space.

This information is fed into a model that helps plan a trajectory for the satellite.

And it was while running this model that the Esa team realised the landmarks were not quite turning up in the right place at the expected time.

In September last year, it was determined that the rotation period was extending by 33 milliseconds per day. Now, with the comet moving closer to the Sun and throwing out much larger volumes of gas and dust, this spin-down effect is approaching a second a day.

“OK, it’s not going to slow down completely – but this gives you an order of magnitude for the accuracy we’re now achieving with the navigation of the spacecraft around the comet,” said Accomazzo.

During December and January, Rosetta was able to move to within 30km of Comet 67P and go into a gravitationally bound orbit.

This is no longer possible and Rosetta has retreated.

“The aerodynamic effects are now more and more important. The jets are getting stronger and stronger,” the Esa flight director told BBC News.

“To give you an idea, these gases come out of the comet for a few kilometres and are moving at 800 metres per second.

“We definitely have to take this into account. We are a big spacecraft with 64 square metres of solar panels. We’re like a big sail.”

LHC will now discover What is dark matter

The LHC, World’s largest and most powerful particle accelerator, is all set to be rebooted …