Green Sea Turtles might be de-listed in endangered species

Every day, animals are added to the endangered species they are abused in some way. But, this time, the green sea turtles’ population is increasing back again. 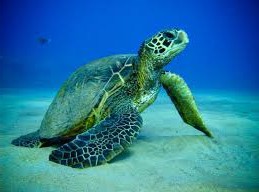 Hawaii’s green sea turtles were under protection for several years due to its known-small population and almost all the turtles are found at the same place.

Last 2012, the government received a request from the Association of Hawaiian Civic Clubs to study and observe the present situation of the green sea turtles. They want to know if the animals managed to recover from the threat, and shall be taken out from the Endangered Species Act protections.

The branch chief of NOAA’s Fisheries Pacific Islands, Patrick Opay, said that, “You have all of your eggs in one basket, so to speak.” He gave that statement to explain that the animal is prone to outbreaks of disease, rising sea levels, overtaken by predators, and other possible threats. He also said that Hawaii has less than 4,000 nesting green seas turtles – 96% of them lives at the French Frigate Shoals in the Northwestern Hawaiian Islands.

These turtles prefer to live by the ocean because they feed on mostly seagrass and algae. Females go back to the same beach where they were born to lay eggs. But this only occurs every two to four years. And what’s worse is that they sometimes need to travel hundreds or thousands of miles just to lay the eggs.

If the petition to remove the green sea turtles from the endangered list is approved, then the management of the animals will be returned to the state. And further allowing more people to visit the islands, interact with the turtles, and probably take care of them. The study conducted last 2007 showed that the population of the Hawaii’s green sea turtles had been growing annually at the rate of 5.7% for the past three decades. The succeeding study showed that they populate 4.8% annually.

The president of the association, Annelle Amaral, was very disappointed because the wildlife agencies are neglecting to remove the green sea turtles from the threatened list.

Amaral heard news from all over the area saying that the turtles were already moving inland to look for food. There is also a popular area that is overpopulated with green sea turtles known as Honu.

NOAA and the U.S. Fish and Wildlife Service have been studying the green sea turtles all over the world. They found several populations in Florida and Mexico. And there are estimated 11 distinct populations including the one in Hawaii. The best observation they made is that some populations have already recovered from the threat, and populating better than they used to.

The wildlife agencies are now asking for the public of the public regarding the petition to remove the green sea turtles from the endangered list. The survey will last for 3 months starting from their scheduled public hearing on April 8 in Honolulu.

Planets might appear from the Dust from Milky Way Galaxy

Astronomers say that dust remains from super nova might explain formation of planet. The discovery …