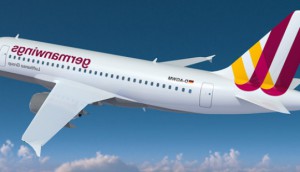 The wreckage of the aircraft, an Airbus A320 operated by Germanwings, a budget subsidiary of Lufthansa, was located by a French military helicopter near the town of Prads-Haute-Bléone, according to Eric Héraud, a spokesman in Paris for the aviation authority, the Direction Générale de l’Aviation Civile.

It was unclear when the pilots last communicated with air traffic controllers. About 40 minutes after takeoff, at approximately 10:40 a.m., radio contact with the aircraft was lost.

Shortly thereafter, air traffic controllers sent out an alert, as the plane descended rapidly from a cruising altitude of 38,000 feet while flying over the town of Barcelonnette in the Alpes de Haute-Provence region, French aviation authorities said.

President François Hollande of France said that many of the victims were German. “The conditions of the accident, which have not yet been clarified, suggest that there might not be any survivors,” he said.

Mr. Hollande said he would be in contact with Chancellor Angela Merkel of Germany and King Felipe VI of Spain, who is visiting France on Tuesday. He said that all information would be shared with the German and Spanish authorities.

“We must feel grief because this is a tragedy that happened on our soil,” Mr. Hollande said. “I want to make sure that there have been no other consequences as the accident happened in a very difficult area to access, and I do not know yet if there were houses nearby. We will know in the next few hours. In the meantime, we must show support.”

A local official in the region, speaking on the condition of anonymity because he was not authorized to comment publicly, said that an initial survey of the area by a helicopter showed that debris had been spread over five acres of a craggy area.

The German foreign minister, Frank-Walter Steinmeier, said he could not comment about speculation regarding the presence of German victims.

A Germanwings Airbus A320 plane last year. A Germanwings plane carrying at least 142 passengers and six crew members crashed Tuesday in southern France. Credit Rolf Vennenbernd/European Pressphoto Agency “In these difficult hours, our thoughts are with all those who must fear that they have relatives among the passengers or crew,” he said, adding that he was “in the closest contact” with the French authorities.

The aircraft that crashed, an A320, is the workhorse of the Airbus fleet, and more than 5,600 of the single-aisle jets are currently in service with hundreds of airlines worldwide. Last year, more than one billion passengers flew on jets in the A320 series — which includes a smaller version, the A319, and a stretched model, the A321 — according to estimates by Ascend, a London-based aviation consultancy.

Since entering into service in 1988, the A320 has been involved in 12 fatal accidents, according to Ascend.

“We are aware of the media reports and all efforts are now going towards assessing the situation,” Airbus said in a statement. “We will provide further information as soon as available.”

Germanwings, based in Cologne, was founded in 2002 and acquired by Lufthansa in 2009. It has since grown to become the German flagship’s main operator for domestic and short-haul European flights from cities outside its main hubs in Munich and Frankfurt. The company operates a fleet of around 81 planes, of which about two-thirds are Airbus A320s and A319s.

Previous Strong Momentum of Euro Continues
Next Inflation Rate went up to Zero in February in U.K