Delay in second run due to short circuit in LHC Components

An error occurred in the magnetic component of Large Hadron Collider which led to delay in the start of second run. Repair of such error may take time between some days to weeks. 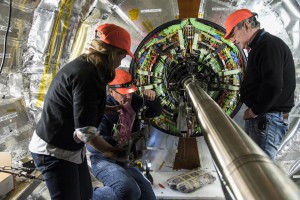 According to an online report, one of the collider’s eight magnetic sectors witnessed a short circuit, which needs to be resolved before the collider begins operation. Though not a big task, repair is expected to take time as the sector remains cryogenically cooled.

“Any cryogenic machine is a time amplifier, so what would have taken hours in a warm machine could end up taking us weeks” said CERN’s Director for Accelerators, Frédérick Bordry, in a news release.

LHC was scheduled to start functioning this week after a two-year maintenance hiatus. The technical glitch is not expected to delay its three year run, assured CERN authorities.

“All the signs are good for a great run 2. In the grand scheme of things, a few weeks delay in humankind’s quest to understand our universe is little more than the blink of an eye,” said CERN Director General Rolf Heuer.

During its last run, LHC had found the elusive Higgs Boson, completing the Standard Model. This time, it is expected to explore dark matter and miniature black holes.

Previous Fluctuating Oil futures much ahead than U.S. stockpile data
Next Engineered food shall save people from starving, say Scientists