Home Business Euro appreciates against dollar with fall in stock

Euro appreciates against dollar with fall in stock

Early this Wednesday, there was news of Euro appreciating against the dollar, however it is not sure if the appreciation will hold on for some time or is just a temporary fluctuation. 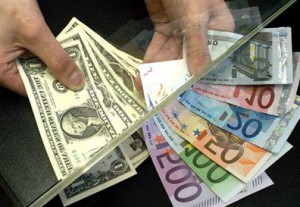 Most currencies have been largely jumpy since last week, at the time when U.S. Federal Reserve amazed investors by indicating it is in no rush to raise interest rates.

The euro currency has bounced up sharply against the buck in last few days amid some sharp swings. The single currency climbed 0.3% in European trade to $1.0951, well above its recent 12-year low of under $1.05.

But the failure to settle decisively above $1.10 shows investors are still nervous that further declines could be in store, according to Commerzbank strategist Esther Reichelt.

The euro also gained against the yen and the British pound.

The rebound for the currency has come amid some improving economic data in the eurozone. Business activity expanded faster than expected in March, figures on Tuesday showed. Investors were awaiting German business confidence data later Wednesday.

Still, the impact of a stronger economy on the currency market is likely to be limited given the European Central Bank’s massive bond-buying program is already in place, said strategists at BNP Paribas. In equity markets, European stocks fell back slightly after Tuesday’s gains. The Stoxx Europe 600 index was 0.4% lower.

A stronger euro is generally seen as negative for European companies, which get much of their revenue abroad.

U.S. stock futures indicated a 0.1% opening gain for the S&P 500. Changes in futures aren’t necessarily reflected in market moves after the opening bell.