NASA: Space Administration of United States, While having its major discoveries of life and future exploration on mars, NASA made another history of covering marathon distance on this red planet. 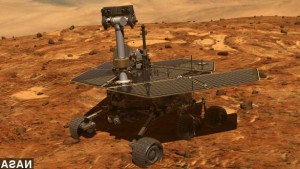 “This is the very first time any human organisation has exceeded the distance of a marathon on the surface of another world,” said John Callas, Opportunity project manager at NASA’s Jet Propulsion Laboratory in Pasadena, California. “A first time happens only once.”

The planet rover team at JPL plans a marathon-length relay run at the laboratory next week to celebrate.

The long-lived rover surpassed the marathon mark during a drive of 153 feet (46.5 meters). Last year, Opportunity became the long-distance champion of all off-Earth vehicles when it topped the previous record set by the former Soviet Union’s Lunokhod 2 moon rover.

As the rover continued to operate far beyond expectations for its lifespan, scientists chose the rim of Endeavour Crater as a long-term destination. Since 2011, examinations of Endeavour’s rim have provided information about ancient wet conditions less acidic, and more favorable for microbial life, than the environment that left clues found earlier in the mission.

In parallel, NASA is developing the human spaceflight capabilities needed for its journey to Mars.

Previous Earning of male nurses is more than female nurses: Study
Next Pittsburgh Obstinate to Continue Business at Their Hometown