2 degree temperature is not enough to save precious species

Most limited target to control the global warming is 2 degree Celsius.  In this increase, it is not possible to maintain the life of various endangered species. 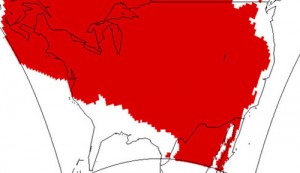 In the month of October, US climate experts David Victor & Charles Kennel called it as scientifically meaningless and politically unachievable. We must get used to the idea of something warmer, they said.

Now the target has been denounced as “utterly inadequate”, by Petra Tschakert of Penn State University in University Park, who has been involved in a UN review of the target. She wants a 1.5 °C target instead. Writing in the journal Climate Change Responses, she says this lower limit is necessary if we want sea levels to rise less than a metre, to protect half of all coral reefs, and to still have some ice during Arctic summers.

Tschakert is not alone. There was a groundswell of support for a revised 1.5 °C target at an expert meeting during the climate conference in Lima, Peru, last December, as part of the UN’s target review. The review is set for publication in June and could be adopted at the Paris climate negotiations this December, where new emissions limits for after 2020 will be agreed.

In a summary of that meeting, Hans-Otto Pörtner ofthe Alfred Wegener Institute in Bremen, Germany, an author of the Intergovernmental Panel on Climate Change’s Fifth Assessment Report, warned that some species would struggle to cope with the speed of 2 °C warming, but that most organisms should be able to move to a different place under 1.5 °C.

Tschakert, herself an author on the same IPCC report, says its officials have in the past vetoed discussion of a 1.5 °C target because they were mandated by the UN to look specifically at the effects of 2 °C.

Nigel Arnell, another IPCC author and a climate scientist at Reading University, UK, says there is simply much less research into 1.5 °C. “The extra benefits are tricky to establish. The science isn’t there yet. Nobody says 2 °C is safe. It is an arbitrary threshold, but so too would be 1.5 °C.”

Is a cap on warming at 1.5 °C achievable? Many think that, with the world already warmed by 0.85 °C, it is now all but impossible. But even so, it could shape the blame game, said Tschakert. The Paris agreement is likely to include a clause entitling the poorest countries to compensation for “loss and damage” resulting from climate change. If a 1.5 °C target were set – and then exceeded – their case for a payout in the event of climate disaster would be that much stronger. “The stakes,” she writes, “are enormous.”