Famous Astronaut of NASA will return from space after 12 months

The famous astronaut of NASA is proceeded on the space travel for 342 days with two companions from Russia to find out more about earth. 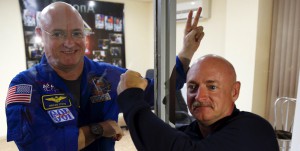 Research Scientists at the host of universities & the medical schools would be watching how Scott Kelly’s weightless lifestyle affects him differently from his Earth-bound twin. They’ll study whether it increases his risk of atherosclerosis (hardening of the arteries), distorts his perception and reasoning, or alters his gut bacteria.

And among other things they’ll look at whether cosmic rays—radiation from deep space—might shorten his lifespan by speeding up damage to his telomeres.

Telomeres are sections of DNA found at the end of every chromosome in your body. They serve a little bit like the end caps on a copper wire that stop it from fraying. They are also thought to play a part in aging, because they get shorter each time a cell replicates and copies its DNA into a new cell. When they get too short, replication stops, making the body susceptible to decay or cancer.

Scientists expect that radiation, weightlessness, changes in diet, and other features of life on the ISS will also make Scott Kelly’s telomeres shorten more quickly than his brother’s (pdf). Effectively, he’ll age faster. Just how much faster is hard to quantify—methods for estimating someone’s age from their telomeres are only just being developed. But comparing the twins’ telomeres (and their production of telomerase, an enzyme that the body uses for repairing telomeres) should provide at least some clues as to how much damage life in space can do—though with only one set of twins to study, the results will be suggestive at best.

Yet even as Scott Kelly ages faster biologically, he’ll age more slowly in physical time. The ISS orbits at about 17,000 miles (27,000 km) per hour relative to the Earth’s surface. In an effect of Albert Einstein’s special theory of relativity known as the twin paradox, that means time will pass more slowly for Scott than for his brother, to the tune of about 28 microseconds (millionths of a second) a day.

There’s a counter-effect, too: The ISS is about 250 miles up, where Earth’s gravity is slightly weaker, and where—by Einstein’s general theory of relativity—time runs slightly faster. (Stronger gravitational pull slows time down: If you saw the movie Interstellar, you may remember that each hour the crew spends on a planet near the massive gravity of a black hole seems like seven years to the crew member who stays behind out in space.) But the increase is only about three microseconds a day.

So Scott will become 25 microseconds a day younger than his already six-minute-older brother Mark. Over 342 days, that’s 8.6 milliseconds—a little less than a hundredth of a second. Even added to the extra milliseconds he’s already gained—he’s spent 180 days in space before, to Mark’s 54—it’s not enough, probably, to compensate for all the biological effects of living up there.