Off the Coast of Africa, Some seals were seen hunting Great White Sharks. These seals have tough grip that makes Sharks dizzy against their attacks. Sharp cuts also seen. 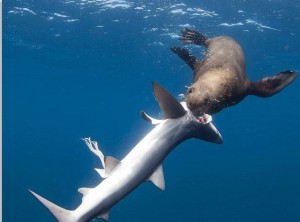 A team of researchers led by great white shark expert Chris Fallows discovered that not only do seals incorporate shark meat into their diets but that scientists’ perception of the food chain in the open ocean might not be as accurate as they were originally thought. The discovery occurred in December of 2012 while the researcher was located around 20 nautical miles off the southwest shores of Cape Point, which is Cape Town’s nearest peninsula.

While running the event – a shark dive – Fallows discovered that there was a group of ten blue sharks in the region. Much to his shock and surprise, he then noticed that a young Cape fur seal – about four and a half long, which is the approximate size of a blue shark, launched a vicious predatory attack on the group Five of the ten sharks succumbed to the seal’s onslaught, being ripped apart by the marine mammal.

Fallows documented the entire encounter on camera, all perplexed since the most well-known food sources for Cape fur seals are regularly considered to be crabs, squid and small fish. These marine mammals are also known to eat infant sharks or even scavenge food from deceased ones, though they’re also known to have never attacked adult sharks in this way. Fallows and his team of researchers say that the seals may target sharks periodically in order to reduce competition for food in the ocean nearby. However, by the same token the seals can gain high-energy nutrients from consuming the flesh of their rivals.

Whether this is a periodical event that occurs within the seal population when certain conditions are met or a new type of behavior due to some outside source is unknown at this time. More research needs to be conducted on the new development before any definitive conclusions can be made on the feeding habits of these seals.

Collision of black holes may lead to Gravitational Stargazing

Astrophysicists, with their new model of black hole collisions has got clarity and understanding on …