In Florida, It is seen that two different races of termite have crossbreed each other and a new super termite has been produced in Florida. 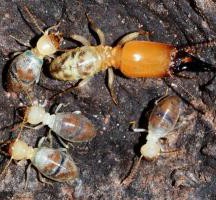 The Researchers Team from the University of Florida studied Asian and Formosan subterranean termites and found that unusual weather patterns of the two species’ swarming seasons caused overlapped for the first time.

They found that cross breeding is leading to the development of a new hybrid species that develops at a 200 per cent faster rate than their parent species.

Chouvenc, the study’s lead author, said, “What we didn’t expect to see was when they’re in the same place at the same time, we saw the male Asian subterranean termites looking for the female Formosan termites in the field.”

The lead author warned that the new species could become a huge problem because a termite colony could live for more than two decades with millions of individuals. Thus, the damaging potential of the hybrid species remains a serious threat to area homeowners.

However, the researcher could not determine whether the super termites can reproduce or not. If this new species reproduces, then there would become even a bigger problem in Florida and its surrounding areas.

The findings of research appeared in the most recent edition of prestigious journal PLOS ONE.