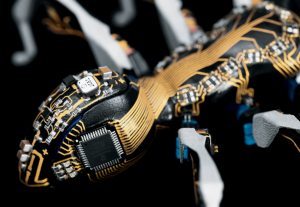 Thousands of robotic ants and butterflies will work in tandem. These are created by the Festo and Germany will fulfill the job of operating them efficiently In future.

Festo, the German Engineering firm is a supplier of automation products to factories around the globe and has now created swarms of robotic butterflies and ants to demonstrate their research.

The company also runs a Network program in Bionic Learning with several universities to create machines that mimic animals with the hope of developing technology that would be useful for commercial application.

The light weight butterflies recently revealed are delicate and flap their wings that have tiny motors and are capable of flying in groups by observing the behavior of each other. Around the room ten cameras are installed and they track the robots to relay the information to a central commuter that controls their motion. Inspite of a 50 cm wingspan the weight of each butterfly is an amazing 32 grams and they can fly for 4 minutes with battery power.

In another project, swarms of ants were created and they work together for accomplishing tasks moving objects that are too heavy for a single machine.

Each ant 13.5 cm long and has stereo video cameras on the head that can also recharge itself simply by resting their antennae against a source of power. Using piezo technology the legs of the ants are made of flexible ceramic to enable the machines walk. If that were not enough, the ants even have working pincers so that they can latch on to objects.

“Like their natural role models, the Bionic Ants work together under clear rules,” said a statement from Festo. “They communicate with each other and coordinate their actions and movements among each other.

“The artificial ants thus demonstrate how autonomous individual components can solve a complex task together working as an overall networked system.”