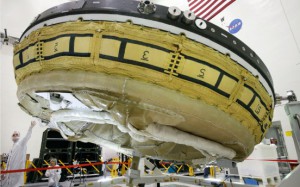 On Tuesday at NASA Lab in California, A spin table test was held to examine the combination of airbags and parachutes for safe launching on red planet exterior.

NASA’s Low-Density Supersonic Decelerator (LDSD) will be taking its first big leap on the pavement to Mars, Tuesday. The spherical spacecraft will undergo a “spin table test” at the Pacific Missile Range Facility in Hawaii. The event will stream live from 12 to 1 p.m. on NASA JPL.

The flying saucer shaped, 15-foot-diameter craft, inflates to its size through a succession of balloons that increase the surface area of the craft. It uses drag to decelerate from Mach 3 to Mach 2, as it prepares its payload for an easier landing on the Martian surface. This table test is a demo of how the craft will rotate as it decelerates NASA’s cargo during the descent.

At this point, the “Supersonic Disk Sail Parachute” designed to decelerate more the craft ahead of a gentle touch-down failed to fully deploy. Nevertheless, since NASA considered SIAD and ‘chute “bonus” elements of the first flight, it’s hoped the next excursion in June will come down with less of a blast.

The point of this high-altitude horseplay is that Earth’s upper atmosphere is a good substitute for the rarefied conditions closer to Mars’s surface. NASA hopes its new tech will activate the current delivery capability “of 1.5 metric tons to 2 to 3 metric tons”.

But what really is most impressive is the helium balloon required to lift the LDSD to blast off altitude. When fully deployed, it is 963,000 cubic meters. Big enough “fit a professional football stadium inside it” – or the equivalent of 384.76 Olympic-sized swimming pools.