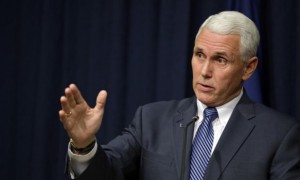 The Hoosier State Republican leaders reached a deal to add new protections to the state’s wildly polarizing Religious Freedom Restoration Act, ensuring that LGBT individuals are not discriminated against by businesses on religious grounds.

“The new law will unequivocally state in the strongest possible terms that Indiana’s Religious Freedom Restoration Act will not be able to discriminate against anyone, anywhere, anytime,” Indiana’s Republican Senate President Pro Tempore David Long said at a press conference.

“If there’s one takeaway from all the calamity in the past week it’s that religious rights and individual rights can coexist in harmony,” he added. “The change will hopefully put an end to the greatest misperception of all, which is that Indiana residents discriminate.”

The Indiana House Speaker Brian Bosma added that the revised law will be presented later Thursday morning and taken up in a committee shortly thereafter.

The conference committee synopsis of the fix says that the law will include “antidiscrimination safeguards” that do “not authorize a provider to refuse to offer or provide services, facilities, use of public accommodations, goods, employment, or housing to any member or members of the general public.”

In the Arkansas, meanwhile, Republican lawmakers were working Thursday to put together their own similarly revised “religious freedom” bill that would also prohibit discrimination against the gay community.

The House leaders in Arkansas said they had stripped out controversial language that extended religious freedoms beyond individuals and hoped to give final approval later in the day to the changes.

The scramble to alter the law came a day after Republican Gov.

Asa Hutchinson announced he would not sign the law until it was changed to include protections similar to those adopted in the Indiana law.

The fix in the Indiana bill is thought to end any and all concerns that the bill could be used to justify refusing service to anyone based on their sexual orientation by those who object on religious grounds, which critics had claimed the law would allow.

If passed, the new bill would be Indiana’s first law granting LGBT individuals protection from discrimination.

The original law, which Pence signed last week, triggered an intense national debate on religion and personal freedoms. It would have prohibited any local government from passing laws that “substantially burden” a person’s ability to express religious beliefs — with businesses included in the definition of a “person.”

The outcry against the measure has centered on the argument that the law is a thinly veiled attempt to use religious freedom to sanction discrimination by businesses against LGBT customers.

A Twitter campaign has pushed a boycott of Indiana services, and multiple states, New York among them, took measures to curb state-funded travel to the Hoosier State, which will host the NCAA men’s basketball Final Four this weekend. Several notable names, including Apple CEO Tim Cook and Connecticut Democratic Gov. Dannel Malloy, have spoken out against the measure, and the band Wilco cancelled a concert planned in the state.

Pence had been steadfast in his support of the law, insisting that critics are misinterpreting it, but eventually called for new draft language to ensure the bill does not enable discrimination.

Previous No relation of time spent with mom and overall success of child, Study
Next CERN restart to Resume Post Easter