European space agency in lieu of finding ancient history landed up finding how these ancient galaxies were formed. They used Planck telescope for searching the radiations caused due to collision. 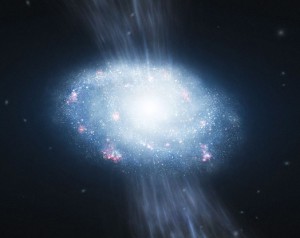 Because we are looking so far back in time, and because the universe is assumed to be homogenous in all directions, we think it’s very similar to looking at the equivalent of what a baby cluster might look like.

Project scientist Brenda L. Frye, an assistant astronomer at the University of Arizona’s Steward Observatory, said in a press release. “In contrast to previous observations, for which the odd one or two baby clusters was found which one would put in a zoo, we now have found a real sample of 200 baby clusters.”

Findings of the observation were then used to develop a galactic map and finally through Herschel Telescope they got a better look at the galaxy clusters they found.

A study on these findings was published Tuesday in the journal Astronomy and Astrophysics.

“It was not known whether young galaxies form stars gradually, like marathon runners pacing themselves, or in bursts,” Frye said. “It turns out these young galaxies were not forming slowly, but in a dramatic way. Lighting up with star formation, they appear like fireworks going off in the sky. It’s like sprinting the first mile of a 26-mile marathon, and then walking the rest of the way.”

The ESA says the Milky Way Galaxy produces one star equal or greater in mass to the one in our own solar system per year. In the period of time the study authors caught a glimpse into, there were more than a thousand new solar masses per year.