NASA Space Agency and its new technological innovations this time has helped us have a better look at the little known and explored Rhea. The photos captured shall be used to learn about the interplanetary system. 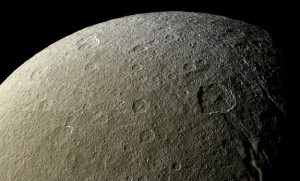 The Cassini spacecraft of NASA has just snapped high-definition pictures of Rhea, and sent it back the photographs to Earth to showcase the first ever super-sharp appearance of the intriguing natural satellite.

Cassini transmitted two photographs over the space medium to Earth, with one snapped from a sheer length of about 50,000 miles from the Saturn’s moon. The second photograph was snapped while the spacecraft is making a closer flyby of Rhea at a closer distance of 34,000 miles.

An assortment of photographs taken by the spacecraft which is equipped with a wide angle and narrow angle cameras were stitched by the tandem of Tilmann Denk and Heike Rosenberg at Freie Universität which is situated in Berlin, Germany.

The initial intention of NASA is to study Titan, Saturn’s largest natural satellite but instead focused on to study the second largest moon of Saturn which happens to be Rhea. The 950-mile wide Rhea is less than a third of the Titan’s diameter. Rhea is in abundance of massive craters an indication that it had been hit by asteroids in the distant past and it is enveloped with water ice that is several times harder than the rock beneath it. The hardness of the water ice is caused by the cold temperature of the moon.