Green streaks of clouds of gas tens of thousands of light-years extensive burn in a series of stunning new images which are captured by the Hubble Space Telescope. 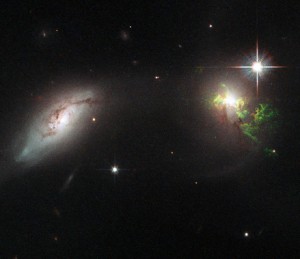 So, eight eerie objects betray the past presence of quasars, the most luminous objects in the universe, whose powerful beams of radiation lend the clouds their ethereal glow, researchers said.

“In each of these eight images, a quasar beam has caused once-invisible filaments in deep space to glow through a process called photoionization,” officials with the European Space Agency (ESA), which partners with NASA on the Hubble project, wrote in a statement.

“Oxygen, helium, nitrogen, sulphur and neon in the filaments absorb light from the quasar and slowly re-emit it over many thousands of years,” the officials added. “Their unmistakable emerald hue is caused by ionized oxygen, which glows green.”

Ever-Since Arkel found initial of these objects, hundreds more volunteers have swarmed to help identify parts of the universe in the Galaxy Zoo gallery. To find this new set, a couple hundred volunteers went through nearly 16,000 pictures online (seven people went through all of them), clicking yes/no/maybe as to whether they saw a weird green blob. Astronomers followed up on the galaxies they identified using ground-based telescopes, and confirmed 19 new galaxies surrounded by green gas.

Quasars are incredibly bright galactic cores powered by supermassive black holes. As gas and dust fall toward the black hole from its surrounding “accretion disk,” the material heats up to tremendously high temperatures. This process can result in a quasar, which blasts jets of high-energy radiation and particles out into space.

The quasars that lit up the eight gas clouds spotted by Hubble have since died out; the clouds lie far from the centers of their respective galaxies, so it took many thousands of years for the quasars’ beams to reach the clouds.

“Galactic mergers do not just alter the forms of the previously serene galaxies involved; they also trigger extreme cosmic phenomena,” ESA officials wrote in the statement. “Such a merger could also have caused the birth of a quasar, by pouring material into the galaxies’ supermassive black holes.”

The first glowing green space cloud was spotted in 2007 by Dutch schoolteacher Hanny van Arkel, and as a result was called “Hanny’s Voorwerp” (which means “Hanny’s Object” in Dutch). Van Arkel found the cloud while participating in an online Galaxy Zoo project that asked volunteers to classify more than 1 million galaxies catalogued in the Sloan Digital Sky Survey (SDSS).

Astronomers went through the volunteers’ finds and identified 20 different galaxies that contained quasar-illuminated clouds. The researchers are publishing their results in The Astronomical Journal.

As Climate Change Polar bears are less likely to get food

With the global warming or Climate change polar bears may die in starvation. With the ice …