Not only just humans in New York City are crazy for food, but ants found in the city and pavements have also developed the taste of human food said a study. 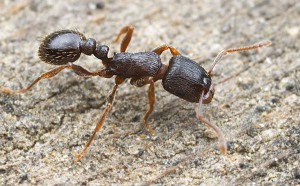 Tests on insects collected from pavements and traffic islands in Manhattan show that their bodies contain the molecular fingerprint of junk food. Researchers gathered up samples of more than 20 species of ants from the sidewalks, medians and parks of Manhattan, and tested them to see how much of a particular carbon isotope was in their bodies.

The same was not true of more genteel ants that frequent leafy park areas.

Lead researcher Dr Clint Penick, from North Carolina State University, said: “Human foods clearly make up a significant portion of the diet in urban species. These are ants eating our garbage, and this may explain why pavement ants are able to achieve such large populations in cities.”

The scientists tested more than 100 ants representing 21 species from dozens of sites in the Big Apple.

Their diet was assessed by analysing the kind of carbon in their bodies. All animals, including humans, take in carbon from food, but the atomic “strain” of the element found in the ants was specifically associated with corn and sugar cane.

Corn and refined sugar are both abundant in human processed foods where they are used as sweeteners and flavour enhancers.

Evidence of the signature carbon-13 isotope indicated that the ants had adopted a junk food diet.

The species with the highest levels of carbon-13 was the most common ant on the street, the “pavement ant” Tetramorium caespitum.

Like members of inner city gangs, Tetramorium soldiers engage in violent turf wars as rival colonies fight for territory. They also do a lot of breaking and entering of people’s homes, and are a recognised house pest.

The scientists, whose findings are reported in the journal Proceedings of the Royal Society B, discovered one street-living ant that turned its antennae up at human food.

Lasius emarginatus, only identified in New York City in the past five years, was also found in high numbers on Manhattan’s pavements and traffic islands. But the isotope analysis showed no evidence of a human-like diet. Instead, the ant appeared to divide its time between subterranean nests and foraging in the branches of city trees.

“This highlights the complex nature of urban ecosystems and how much we still have to learn about how these species relate to each other and to the environment,” said Dr Penick.