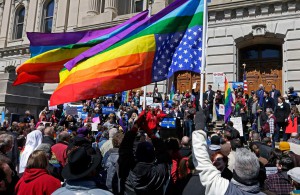 U.S. – Who knew something like this may happen? Something, which is better to be addressed as backfire happened on Thursday when Indiana Gov. Mike Pence permitted changes to the state,’s newly approved religious freedom law which clearly clarify that the religion will not be used as a tool to discriminate communities, however his opponents have taken the cue and changed the direction to somewhere else. They proclaimed in high pitch that from now onwards Indiana will not only be recognized as the 20th state to approve religious freedom act but the state will also be a freer, non bias 20th state for all LGBT residents.

Suddenly the nation’s focal point changed overnight and the community which had been making futile attempts to uphold LGBT values have now  turned out to be the center of attention. However, civil right movements are seen to be tasting success only when base level majority is involved so that reformation can be boosted, but here the LGBT advocates are taking full advantage of the moment   condemning the absence of discrimination protections for the LGBT community. Now claiming something like this is a part of strategy that these advocates are using. People are showing strong outrage against this law or the way it is written, that many will use this law maneuvering it as a license to use religion in discriminating people depending upon their sexual orientation.

Amidst all this ,” says Eliza Byard, executive director of the Gay, Lesbian & Straight Education Network (GLSEN) “Anyone involved in social change has often had to take something that looked pretty bleak and turn it into an opportunity