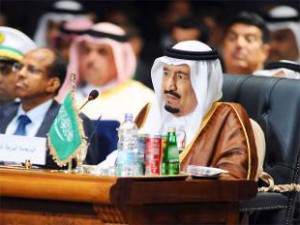 This Friday Iranian President Hassan Rouhani promised that his country would follow the historic agreement of curbing the nuclear program.

As the statement to the nation, Reuters news agency reported, Rouhani declared in Tehran: “We don’t cheat. We are not two-faced.” He added: “If we’ve given a promise. we will take action based on that promise. Of course, that depends on the other side taking action on their promises, too.”

The comments came after Saudi Arabia’s King Salman expressed cautious backing for efforts to reach a final deal to curb Iran’s nuclear program, telling President Obama that he hoped it would strengthen “stability and security” in the region.

The remarks by Salman suggested no major policy shifts by Saudi Arabia or its Persian Gulf Arab partners after the announcement Thursday of a framework that would place limits on Iran’s nuclear program — but allow some level of uranium enrichment — in exchange for easing international sanctions.

But Salman’s statement, reported Friday by the official Saudi Press Agency, also stopped short of full endorsement, underscoring the unease in the gulf and wider Middle East about any steps perceived as benefiting Iran.

Rouhani told Iranians that the six major world powers negotiating with Iran have now accepted that the nation can enrich uranium on its own soil — a step they had strongly opposed as a nuclear proliferation risk but that Iran steadfastly contended was a right granted to it as a signatory of the Non-Proliferation Treaty. Objections to Iran’s uranium-enrichment program, an effort that Tehran insisted on maintaining to guarantee an independent fuel supply for its nuclear power plants, have been enshrined in a series of U.N. Security Council resolutions that now are to be scrapped under the deal.

“Today is a day that will remain in the historic memory of the Iranian nation,” Rouhani said, according to Reuters.

“Some think that we must either fight the world or surrender to world powers,” he said. “We say it is neither of those; there is a third way. We can have cooperation with the world.”

King Salman said he hoped to reach a final deal and mandatory accord that would aid in developing regional and international security, a statement said.

For his part, the Custodian of the Two Holy Mosques expressed, over the line, hope to reach a final and mandatory accord conducive to consolidating regional as well as international security and stability.

Saudi Arabia and the other Sunni Muslim states in the gulf view Shiite-led Iran as their main regional rival. Tensions have further escalated as a Saudi-led coalition carries out airstrikes in Yemen aimed at weakening a Shiite rebel force, which gulf leaders say receives support from Tehran.

King Salman “expressed his hope that reaching a final binding deal would strengthen the stability and security of the region and the world,” the Saudi Press Agency reported.

It said Salman conveyed the message to Obama in a telephone call late Thursday, hours after the outline of the nuclear deal was announced in Switzerland following marathon talks that went two days past a self-declared Tuesday deadline.

In a further sign of the White House outreach to the gulf, Obama invited leaders from the six-nation Gulf Cooperation Council — the region’s main political bloc — to an upcoming summit at Camp David. Obama said the gathering will discuss ways to “further strengthen our security cooperation.”

The United States has a host of important military outposts in the gulf, including air bases and the U.S. Navy’s 5th Fleet in Bahrain.

Backing from the Saudi ruler for the Iran deal — even if tepid — is critical for Washington. Saudi Arabia generally sets the tone for the Arab gulf states. The United States also has faced criticism that allowing Iran to keep the ability to make nuclear fuel could touch off demands for similar technology in the Middle East and open a potential atomic arms race.

Iran insists it seeks only to make nuclear fuel for reactors for energy and medical applications.

“The gulf states, particularly Saudi Arabia, fear the nuclear deal between the United States and Iran is premised on a recognition of rising Persian power in the gulf and the region,” said Fawaz A. Gerges, professor of Middle Eastern politics at the London School of Economics.

But many analysts do not believe Saudi Arabia or other gulf states would pursue nuclear arms as a hedge that Iran could one day break the agreement and produce warheads.

“So they are very anxious, very alarmed, but I doubt very much whether Saudi Arabia or the United Arab Emirates would go nuclear,” said Gerges. “It would be a costly and risky option.”

King Salman, meanwhile, also must try to calm worries among some members of Saudi Arabia’s ruling elite who may endorse a stronger response from the kingdom.

Last month, a senior Saudi adviser, Prince Turki al-Faisal, said the terms granted Iran — such as allowing some level of uranium enrichment — would be sought by Saudi Arabia and other countries. A week earlier, Secretary of State John F. Kerry visited Riyadh to try to reassure the kingdom’s leaders that the nuclear talks with Iran did not signal a rollback in U.S. security commitments to the gulf.

In Iran, internal fissures also appeared. The framework, negotiated by Iranian Foreign Minister Mohammad Javad Zarif, was slammed by some hard-liners who view it as demanding too many concessions from Tehran.

Hossein Shariatmadari, editor of the hard-line Kayhan daily, was quoted by the Fars News Agency as complaining that Iran exchanged its “ready-to-race horse” for one with a “broken bridle.”

Another conservative commentator, Mahdi Mohammad, told Fars that a “disaster” had befallen the once-secret uranium-enrichment facility known as Fordow. Under the terms of the deal, Iran agreed to halt uranium enrichment at the bunker-like site and convert it to a nuclear research center.

But the backlash in Iran appeared unlikely to force any scuttling of the deal, which needed the backing of Iran’s supreme leader, Ayatollah Ali Khamenei, to move forward.

For Saudi Arabia, an anchor U.S. ally in the Middle East, the outreach between Washington and Tehran is the latest — and perhaps most troubling — in a series of fissures with the Obama administration that include U.S. refusal to use military force directly against the Saudis’ foe in Syria, embattled President Bashar al-Assad.

But in practical terms, the Saudi response is likely to be far more cautious and reflect an evolution, rather than a drastic turn, in Riyadh’s relations with the United States, which still is seen as the ultimate guardian for the region’s security.

“No one is going to do anything rash in the gulf,” said Sami Alfaraj, a Kuwaiti security adviser to the six-nation Gulf Cooperation Council on issues including Iran’s nuclear program. “But that doesn’t mean that the gulf states are not looking at contingencies in case Iran breaks the deal and moves toward a nuclear weapon.”

Among the possible plan-ahead steps: further cementing ties with nuclear-armed Pakistan as a hedge against Iran, and an agreement by the Arab League to develop a rapid-reaction force to respond to regional crises.

“There are options for counterweights,” said Alfaraj.

Meir Javedanfar, an Iranian-born regional affairs lecturer at the Interdisciplinary Center in Herzliya, Israel, predicted a sharp increase in defense spending by the gulf states despite being hit by a sharp drop in oil prices.

“More important than that, they are very likely to challenge Iran’s influence in the region, in places such as Iraq, Yemen, Syria with even more vigor than before, and in a unified manner,” he said.

The stronger military posture has already been on display in Yemen, where the Saudi-led air campaign began last week, seeking to drive back rebels and allow the return of President Abed Rabbo Mansour Hadi.

On Thursday, the coalition spokesman, Brig. Gen. Ahmed Asseri, suggested that the mission could eventually turn its firepower on Yemen’s powerful branch of al-Qaeda, calling the terror group and Yemen’s Shiite rebels “two faces of the same coin.”

“The Arabs are going to take a much more decisive foreign policy against Iranian influence in the region,” said Mkhaimar Abusada, political science professor at the al-Azhar University in Gaza.

Across the gulf, the nuclear talks have been a main topic for months. Moments after the deal was announced, social media was abuzz with options — some supporting regional compromise and others taking a hard view of any accommodations with Iran.

Jamal Khashoggi, a prominent Saudi political commentator, posted a dark-humor tweet saying the war in Yemen has been a timely salve to Saudi national pride.

“Thank God for ‘Decisive Storm’ in Yemen,” he wrote, using the military’s name for the campaign. “Otherwise, the [nuclear] agreement would be a huge disappointment.”

Louis Jordan, 37 years old man posted his photos on Facebook along with his 35 …