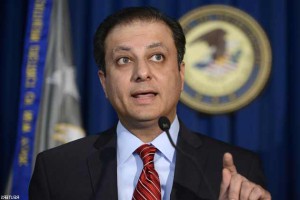 The New York court has denied the appeals of Preet Bharara, Manhattan US Attorney and found that both managers are convicted of insider trading and should be sent to jail.

The document of three-sentence issued on Friday, The U.S. 2nd Circuit Court of Appeals said it rejected Bharara’s petition for a rehearing in the case.

It also reaffirms the court’s decision to significantly narrow the legal definition of insider trading — a move that will impact many more people than just Chiasson and Newmam.

Bharara’s office declined to comment. The U.S. attorney could seek to have the U.S. Supreme Court review the case, but he would need to get permission from the U.S. solicitor general.

“This victory is proof that the justice system worked how it is supposed to,” said Gregory Morvillo, Chiasson’s attorney at Morvillo LLP.

“As Mr. Chiasson begins to look upon his career with fresh eyes, he sincerely hopes that his experience will become a cautionary story about the consequences of prosecution based on what the Second Circuit has characterized as doctrinal novelty,” Morvillo said.

In December, the appeals court ruled that the government presented “no evidence that Newman and Chiasson knew that they were trading on information obtained from insiders in violation of those insiders’ fiduciary duties.”

In other words, to be convicted of illegal insider trading a person must have direct knowledge of the insider doling out the tips and know that he or she was in the wrong. The court said the government must also prove that the tippee knows the tipper received some sort of benefit in exchange for the information provided.

The ruling threatens to undo a chunk of the government’s work on insider trading since its Wall Street crackdown kicked off in 2007. In particular, it threatens cases in which the alleged trader was not in direct contact with the tipster but instead dealing with someone one, two or even three steps removed from the original source of information.

Newman and Chiasson, for example, traded on tips they received from their analysts on staff, who scouted for inside information from a network of analysts and corporate insiders.

Several people convicted in Bharara’s widespread crackdown on insider trading have publicly declared that they, too, should be exempt under the appeals court decision.

In the March, hedge fund manager Michael Kimelman, 44, filed a motion to vacate his conviction on the basis that the government provided no evidence that he knew the source of the tips that led to his conviction or that the information was wrongfully obtained.

Hedge fund manager Doug Whitman, who is serving a two-year prison sentence after his conviction in 2012, recently filed a motion to vacate his conviction on similar grounds.

“Today’s decision reaffirms that Michael Steinberg did not commit a crime and never should have been prosecuted,” Steinberg’s lawyer Barry Berke said. “The decision requires his conviction to be thrown out as well.”

Canada is eminent for its New horned dinosaur

More than what was though primarily, Potential pain relieving cone snail venom is practically intricate enough to analyze