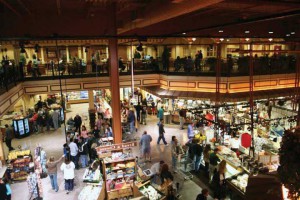 According to latest consumer reports survey, Wegmans has been rated on top of the supermarkets where Americans prefer to buy food products. The points were given on basis of quality, freshness, baked goods and shopping experience.

The Gates-based grocer again finished atop Consumer Reports rankings of “The Best Supermarkets in America.” The nonprofit based in Yonkers, Westchester County, ranked 68 chains based on freshness, cleanliness, affordability and more.

Scores were based on six categories, including quality and freshness of produce, meat, baked and store-prepared foods, as well as employee courtesy and store cleanliness. The top score a chain could earn was 100.

Wegmans finished with a score of 90. It was the only chain to receive top scores of completely satisfied in all six categories. It also received the highest scores for having the freshest food, cleanest stores and best bakeries. Only Trader Joe’s ranked higher for having the best prices for its organic foods.

It received strong reviews across the board for the freshness its products, from vegetables and meats to bakery items and prepared foods. CEO Danny Wegman credits the company’s employees for these results.

“A big thank you goes to our employees,” CEO Danny Wegman said in a statement. “Results like these are only possible because of our people and because we are paying attention to the things that matter most to our customers.”

For a relatively small chain with just 85 stores, Wegmans does a stellar job of taking care of its workers. It recently edged out Amazon to earn the top ranking for company reputation, and it’s known for offering school scholarships and other benefits to its employees. It also dedicates resources to ensuring its workers move up the ladder: 66 percent of its promotions are internal.

Publix and Trader Joe’s rounded out the top three supermarkets in overall score, though they fell behind in produce freshness. The only other two chains that earned top marks for freshness were The Fresh Market and Whole Foods.

Warehouse stores like BJ’s, Target, Walmart and Sam’s Club got below-average ratings on produce freshness and sat in the bottom half of the list. But Costco fared better, with sixth place overall and an average ranking for produce quality.

Whole Foods is known for having a strong benefits program, with even part-time employees eligible for insurance. Workers can also earn rewards for productivity at work.

The family-owned Wegmans runs more than 80 stores in six states, most which are based in New York. Forbes listed company revenues as of October 2014 at $6.5 billion, that’s when the publication listed the grocer ninth on its list of America’s Best Employers.