Tornado ties up in central U.S. ‘One dead’ 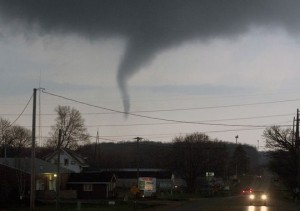 On Thursday evening, A tornado touched Rochelle Ill, causing damage to the place and leading to death of one person. The causality occurred at Fairdale, Ill., which was confirmed later on by the public information officer of Illinois Emergency management agency.

A 67-year-old woman was the victim, the Rockford Fire Department confirmed to USA TODAY via Twitter on Friday. Eleven more people were treated for injuries at local hospitals, the fire agency said.

The tiny hamlet of Fairdale is about 60 miles northwest of Chicago and took a direct hit when a large twister crossed Interstate 39, according to the Weather Channel.

The Rockford Fire Dept. said in a tweet from Fairdale that “all structures in town are damaged.”

The tornado swept across the town of Hillcrest, about 80 miles west of Chicago and just north of Rochelle.

The weather forced the cancellation of more than 800 flights at Chicago’s O’Hare International Airport and delayed hundreds more.

Television footage showed multiple homes damaged in a small community in DeKalb County. Tornadoes were reported near Peoria, Illinois and Dewitt, Iowa earlier, but there were no reports of damage.

A tornado watch was posted for the Chicago area, meaning conditions are ripe for tornadoes to form. The watch extended across most of northern Illinois, eastern Iowa and northeastern Missouri.

Overall, nearly 70 million Americans were at risk for some form of severe weather as of late afternoon, according to the Storm Prediction Center.

Tornadoes were also possible in portions of Texas, Louisiana and Arkansas.

In addition to the dangerous aspect of the storms, travel disruptions ranging from blinding rain and flooded roadways to flight delays and cancellations are likely, AccuWeather said. This includes airports such as Chicago’s O’Hare International, one the world’s busiest.

One woman died in the Indianapolis area Wednesday night when she was swept away by a flash flood.

Further north, the seemingly endless winter of 2014-15 continued to hang on. Winter storm advisories and warnings were in effect across northern Wisconsin, northern Michigan and northern New England.

On Friday, the severe storm threat area will shift to the Southeast, Gulf Coast, and East Coast.

People have been expecting since long, Hillary Clinton to run president again in the year 2016, …