SUITLAND, Md. — According to the spokesman of hospital, security guard was shot dead when he approached a couple fighting near the gate of U.S. Census Bureau. 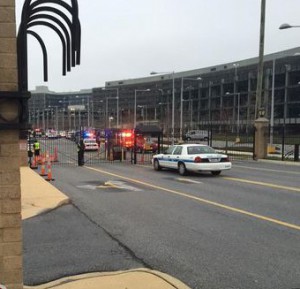 The incident started at about 6 p.m. when a car with a couple apparently arguing inside approached the gate of the Census Bureau in Suitland, Md., Lanier said. As the security guard approached the car, described as a green Honda, he was shot by gunfire coming from inside the car.

Earlier at the Census Bureau, all entrances were shut down around 7:45 p.m. as heavily armed and armored tactical teams and sharpshooters moved in to the complex on Silver Hill Road, which also houses other federal offices. Media and bystanders were moved 200 yards away.

A loudspeaker announced a “security-related incident” and said all vehicles on campus would be searched.

About 8 p.m., a WUSA-TV reporter heard the first of more than 20 loud bangs from inside the complex over several minutes. The source of the noises was not immediately clear.

In a statement issued at 8:15 p.m., the Census Bureau said only that there had been “an incident” at the Suitland Federal Center and that an investigation was “ongoing.”

“We are committed to the safety of all staff who work at the Census Bureau and are currently making sure that everyone is safe and secure,” the statement said.

The Census Bureau has been headquartered there since 1942, and employs about 4,285 staff members.