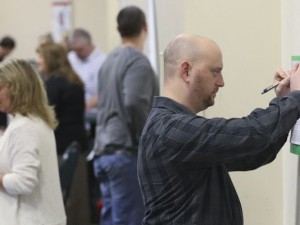 Weekly applications rose 14,000 to a seasonally adjusted 281,000, the Labor Department said Thursday. The climb occurred after applications plummeted to match a 15-year low in the previous week.

Even with the increase, other data in the report demonstrated that few people are seeking benefits. Since applications are a proxy for layoffs, that suggests companies are confident enough in the economy to keep their staffs and are cutting few jobs.

And the number of people receiving benefits fell to 2.3 million, the fewest in more than 14 years. That partly reflects the drop in layoffs and improving job market. But it also declined because the federal government’s extended benefits program, which added more weeks of jobless aid to the 26 weeks provided by most states, expired at the beginning of 2014.

As a result, fewer people are receiving aid because they have used up all the weeks available to them.

The figures offered some hope that last month’s sluggish hiring could be temporary.

The government said last week that employers added just 126,000 jobs in March, the fewest in 15 months and snapping a yearlong streak of monthly gains above 200,000. The unemployment rate remained 5.5 percent.

“If claims remain this low … it will be hard to claim there is persistent weakness in the labor market,” Guy Berger, an economist at RBS Securities, said in a note to clients.

The slowdown in hiring followed a raft of indicators that pointed to a slowing economy. Factory output has fallen this year as businesses are placing fewer orders for industrial machinery and other equipment. Lower oil prices, in particular, have reduced demand for drilling equipment.