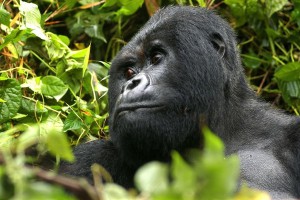 Number of studies has been conducted on the mountain Gorilla, however the recent study conducted on habits of Gorillas.

This study in Science said mountain gorillas inherit identical DNA segments from both parents in about one-third of their genome.

The apes are already critically endangered due to habitat loss, hunting and diseases transmitted by humans.

Inbreeding can make them more vulnerable to disease or environmental change.

University of Cambridge geneticist Aylwyn Scally said: “Mountain gorillas are critically endangered and at risk of extinction, and our study reveals that as well as suffering a dramatic collapse in numbers during the last century, they had already experienced a long decline going back many thousands of years.”

But the researchers say there is hope. There are fewer of the most harmful mutations than in other gorillas.

Dr Scally said: “We have shown that although low in genetic diversity they have not yet crossed any genetic threshold of no return. They can continue to survive and will return to larger numbers if we help them.”

And Copenhagen Zoo geneticist Christina Hvilsom said: “While comparable levels of inbreeding contributed to the extinction of our relatives the Neanderthals, mountain gorillas may be more resilient.”

Chris Tyler-Smith, co-author from the Wellcome Trust Sanger Institute said, “Mountain gorillas are among the most intensively studied primates in the wild, but this is the first in-depth, whole-genome analysis, three years on from sequencing the gorilla reference genome, we can now compare the genomes of all gorilla populations, including the critically endangered mountain gorilla, and begin to understand their similarities and differences, and the genetic impact of inbreeding.”

The population of mountain gorillas dropped to 253 in Virunga volcanic mountain range, located along the border of Uganda, Rwanda and the Democratic Republic of Congo in 1980’s as a result of hunting and habitat destruction.

Since then conservatives have managed to get the population to 480.

The researchers wanted to study if any genetic mutation have occurred in the small population of gorillas but they were surprised to see a number of harmful mutations were removed.

Aylwyn Scally, co-author from the Department of Genetics at the University of Cambridge said, “This new understanding of genetic diversity and demographic history among gorilla populations provides us with valuable insight into how apes and humans, their closely related cousins, adapt genetically to living in small populations, in these data we can observe the process by which genomes are purged of severely deleterious mutations by a small population size.”

The researchers have collected blood samples of gorilla over several year periods and sequenced the entire genome of seven mountain gorillas.

They found that these gorillas were two or three times less genetically diverse than other gorilla population found in central and western Africa.

They also found that gorillas have been surviving in small population since thousands of years.

The researchers were worried that the decline in 1980’s is not good for gorilla but the study has revealed that they are coping in small population for thousands of years.

The findings were published in journal Science.

Previous PostTyrannosaur family may have indulged in Cannibalism Next PostTornado ties up in central U.S. ‘One dead’

In a challenge to U.S. for top spot, China June Crude oil imports up 27 percent on year!