Home Science Tyrannosaur family may have indulged in Cannibalism

Tyrannosaur family may have indulged in Cannibalism

According to the study conducted in Canada, tyrannosaurs a family of fearsome might have indulged in Cannibalism owing to which signs of injury have been discovered in their skull. 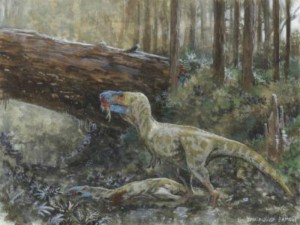 Team of Researchers studied the skull of a Daspletosaurus and discovered numerous injuries inflicted during its life and death. A genus of tyrranosaur, the Daspletosaurus, is smaller than the T. rex but still, the dinosaur the skull belonged to was believed to be under 20 feet long and over 1,000 pounds in weight. However, a Daspletosaurus of that size is just a sub-adult (an older teen, in human terms).

An examination of the Daspletosaurus’ skull revealed that the dinosaur sustained injuries throughout its life. While not all are attributed to bites, several closely resemble the tyrannosaurs’ teeth. One specific bite was discovered at the back of the head, breaking off a part of the skull and leaving a circular puncture on the bone resembling a tooth. Alterations could be observed on the surface of the bone which meant the Daspletosaurus healed from its injuries.

David Hone, from the Queen Mary, University of London and lead author for the study, said that the dinosaur clearly had a tough life.

“The most likely candidate to have done this is another member of the same species, suggesting some serious fights between these animals during their lives,” he added.

As if being injured by a member of the same family was not troubling enough, the researchers also noted post-mortem marks showing that, after death, the Daspletosaurus was then consumed (at least partly) by a large tyrannosaur. There was no evidence pointing to another tyrannosaur as having dealt the final blow to the Daspletosaurus but it was definitely scavenged by a member of its family.

Fights between large carnivorous dinosaurs have already been documented, and there has been previous evidence of cannibalism in dinosaurs, but this is the first time that the two were observed in the same individual.

The Daspletosaurus roamed Earth around 75 million years ago, almost 10 years before the T. rex.

After a 3-day closure, a new route to Golden Gate Bridge reopens!

AAA Michigan: In the past week, Gas prices fell by 10 cents and are now available at, $2.84