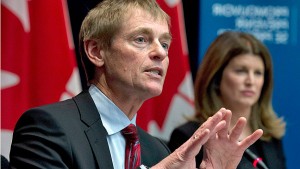 Dr. Gregory Taylor, Chief Public Health Officer of Canada; will head West Africa to combat Ebola. The WHO has said that although the Ebola cases have declined in West Africa, but the epidemic is still considered an emergency. Dr. Gregory also will test the latest Ebola vaccine created in federal labs in Winnipeg.

Taylor said that although the number of cases is dropping, “there’s lots of rumours of unreported cases, so let’s hope that those are simply rumours and we do manage to get it to zero.”

While in West Africa, Taylor will also check in on the field trials for the Ebola vaccine that was invented at the federal lab in Winnipeg.

He said the vaccine is being used in so-called “ring trials” involving people at high risk of contracting Ebola.

“We still don’t know if the vaccine works in humans, so that’s the thinking around the ring vaccine trials. For example, if you vaccinate all of the contacts, these are people with a very high risk of developing the disease, and [if] they don’t get Ebola, then you know that it’s working,” Taylor said.

Taylor plans to return home from the region next weekend.

Launch of Watson Health by IBM

IBM has lately announced of his new business unit called Watson Health, which shall provide …