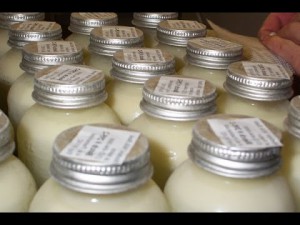 Today, if you have difficulty in breastfeeding, then you can buy the milk through online transactions. Is this good? No, according to Sarah Keim, Ph.D., of the Center for Health Biobehavioral at Nationwide Children’s Hospital in Columbus, Ohio. According to Keim there is danger of buying breast milk online, because of the risk of infectious diseases such as HIV, hepatitis and even syphilis

A 2009 study done at Stanford University, has said that among 1091 women who want to donate breast milk, 39 including HIV, hepatitis, and syphilis. In addition to the risk of infectious disease, other danger is exposure to drugs that can be transferred through breast milk.

There’s more. In a 2013 study, Keim and her colleagues found 74% of the breast milk they purchased contained staph, strep or other bacterial species.

A follow-up analysis recently published in the journal Pediatrics found one of every 10 of those samples wasn’t 100% pure mother’s milk. Instead, the donor milk contained added cow’s milk or milk-based formula powder.

“If a baby with cow’s milk allergy were to drink this milk,” said Keim, “it could be very harmful.”

If that isn’t bad enough, the researchers found the levels of bovine contamination, at 10%, to be too high to be accidental. Simply put, said Keim, the sellers deliberately “topped off” their breast milk, presumably so they could sell more.

The demand for breast milk has exploded in recent years.

The market includes people who believe it boosts their immune systems or builds muscle mass and stamina. Some add it as a “special” ingredient in their cooking. But most of the demand is from parents.

The woman who survived breast cancer, the mom who suddenly loses her milk because of sickness or stress or the couple who adopts a tiny newborn all want to give their babies the best start in life and with good reason.

“Breast milk, because of its immunological properties, can help fight against infections that a baby may be exposed to,” said WebMD pediatrician Hansa Bhargava. “It also may protect against allergies, asthma and sudden infant death syndrome.”

Moms are being told that selling their excess breast milk could be a lucrative addition to a family’s income. On his site, the Penny Hoarder, Kyle Taylor recommends starting a home-based business selling breast milk as one of his “creative ways to fix your budget.” The article said that if a mom “sold 25 ounces of breast milk per day at $2.50 an ounce for a year, you’d make almost $23,000. Like this idea? Click to tweet it!”

While both Ebay and Craigslist ban the sale of “bodily fluids” in their terms of use, that hasn’t stopped the occasional effort to tap into the market. But most of the transactions occur on individual sites, such as Only the Breast, the website Keim and her colleagues used to buy all of their tainted and “topped off” breast milk.

Only the Breast co-founder Glenn Snow told CNN he felt the study “did not follow any of our safety guidelines. They didn’t interview the donor, they didn’t communicate with the donors verbally and we think that potentially skewed the results of the study.”

The site put up this statement:

“In light of cow’s milk contamination of some breast milk samples purchased via the internet, Only the Breast reiterates our long-term guidance that all sellers should follow best practices using aseptic technique for expressing, handling, and storing human milk which also addresses shipping, freezing, and all buyers must follow safety guidelines for peer to peer donor screening. Additionally it is expressly forbidden in our terms of use to add any form of contaminants such as bovine i.e., cow’s milk.”

When asked how they policed their policies, Snow said: “We do not interfere with nor become involved with transactions. We only recommend safety guidelines and practices to be followed.”

The demand for breast milk has also launched a number of milk-sharing volunteer communities, both on the web and on Facebook. Eats on Feets and Human Milk 4 Human Babies are the largest; both sites are strongly against the sale of breast milk.

“It is our firm belief that the selling and buying of breast milk carries undue medical and ethical risks,” state Eats on Feets administrators Shell Walker and Maria Armstrong in a letter posted on their site.

A spokesperson for Human Milk 4 Human Babies told CNN: “If someone attempts to buy or sell milk on our network pages, they are reminded that our pages are noncommercial, the post is removed, and user banned if the action continues.”

Instead, both sites encourage the free sharing of breast milk among mothers after careful screening. Safety guidance is similar to that on Only the Breast. Eats on Feets, for example, points users to “The Four Pillars of Safe Breast Milk Sharing,” full of advice on milk handling, home pasteurization, donor screening and blood testing.

But are women following that advice?

A recent post on the Eats on Feets Facebook page asked mothers to explain why they thought breast milk sharing was safe. Among the first 50 replies, only six said they asked donors to be tested. “If a mom is taking the time and effort to pump then most likely the milk doesn’t have issues,” reads one typical comment.

“How do you trust someone you just met, whether you’ve had a lot of friendly Facebook conversations or you’ve talked on the phone?” said Keim. “This is your baby you’re talking about, this is something your baby is going to drink, and it’s clear the risks are outweighing the benefits.”

“But I’m not surprised,” adds Keim. “The intentions are good, but it is putting a lot of the onus on the women involved and they don’t have the tools to effectively reduce the risk. The average mom does not have a laboratory in their kitchen to test the milk to know if anything has been added or what the bacterial levels are.”

Many moms turn to breast milk when their babies have medical conditions, fail to thrive or can’t tolerate formula, believing they have no medical alternatives.

“There are virtually no medical conditions in which the baby can only drink breast milk,” said WebMD’s Bhargava. “There are many types of formula available including those for infants with milk protein allergies and those with metabolic conditions. Formula provides an alternative to breast milk for those who cannot breast-feed.”

“There is a lot of unwarranted guilt surrounding not breast-feeding babies,” adds Atlanta pediatrician Jennifer Shu. “Even though breast milk is best, in some situations, formula is the better and safer choice.”

The safest choice for donor breast milk is a milk bank. Nonprofit versions have been around for decades, collecting breast milk after a thorough screening and blood testing of the donors, and then pasteurizing it to meet standards reviewed by the CDC and the FDA.

Unfortunately, the costs for all that safety can be quite high, currently averaging $4 an ounce. Considering a baby can drink up to 30 ounces of breast milk each day, that’s not likely to be in a family’s budget.

Nor is the milk readily available. The vast majority of any milk bank’s supply goes to the most fragile infants, such as the 500,000 preterm babies born each year that fight for their lives in neonatal intensive care units across America.

According to the Human Milk Banking Association of North America, only about 27% is provided to outpatient infants with medical issues.

“What will happen is that if the donor human milk doesn’t have the necessary level of protein, calories and fat, then many times that can be sold outside the NICU because then it is able to be still helpful to kids with gut issues and the like,” said John Honaman, HMBANA’s executive director.

So where does this leave the mom who’s milk has dried up?

“I do think we have a ‘milk gap’ in this country,” said Keim. “I hear moms say often ‘I’m in a corner, I can’t produce enough milk for my baby, but I can’t get safe milk for my baby’.”

“Talk to your pediatrician for advice on your specific situation,” advised Shu. “Make sure you are aware what you are giving your baby — beware of contaminants, infections, spoiled milk, tampered with milk, ingredients unsafe for infants (such as cow’s milk) and determine if that is worth the potential risk.”