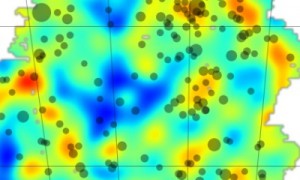 A team of scientists who joined in the Dark Energy Survey (DES), a multinational collaboration of research institutions in the United States and Europe, has released a “map of dark matter”. This map is the result of research that aims to determine the distribution of dark matter in the universe. This map was made by using a 570-megapixel Dark Energy Camera mounted in Victor Blanco telescope in Chile.

Vinu Vikram from Argonne National Laboratory has said that the team measured the distortion that is barely visible to form a map. So far, this map is only able to map the 0.4% of the sky, but this map can show the dark matter filaments aligned with galaxies and clusters of galaxies. Dark matter is an old unsolved mystery of the universe and universe is believed to be formed in a number of very significant of dark energy.

Although these “mass maps” currently cover just 0.4 percent of the sky, they do so in unprecedented detail, showing filaments of dark matter aligned with galaxies and clusters of galaxies. Moreover, these initial maps cover just three percent of the area DES plans to document over its five-year mission.

“Our goal all this time has been to see the invisible — to see dark matter,” Sarah Bridle, an astrophysics professor at the University of Manchester in the U.K. and co-chairperson of the DES weak-lensing group, which produced the maps, reportedly said. This goal, however, is extremely hard to attain, given dark matter’s mysterious properties.

Dark matter has long remained one the greatest unsolved mysteries of the cosmos. It is believed to constitute over 84 percent of total matter and nearly 27 percent of the entire universe. Despite its apparent abundance, it has been incredibly hard to detect. While its presence can be inferred from the gravitational pull it exerts on visible matter, the fact that it does not emit or absorb any radiation makes it next to impossible to study.

In order to create the maps, the scientists at DES utilized a phenomenon known as “gravitational lensing” — the bending of light caused by the distortion of space-time by dark matter filaments.

“Our analysis so far is in line with what the current picture of the universe predicts,” Chihway Chang from the Swiss Federal Institute of Technology, one of the authors of a report detailing the findings, said, in the statement.

The current understanding dictates that galaxies form in regions with high dark matter density — a theory that is backed up by the maps, which show large filaments of matter along which visible galaxies and galaxy clusters exist and cosmic voids where very few galaxies reside.

“Zooming into the maps, we have measured how dark matter envelops galaxies of different types and how together they evolve over cosmic time,” Chang said. “We are eager to use the new data coming in to make much stricter tests of theoretical models.”

The ultimate goal of the DES is to quantify and understand the role of dark energy — the mysterious force that is believed to be responsible for accelerating the universe’s expansion.