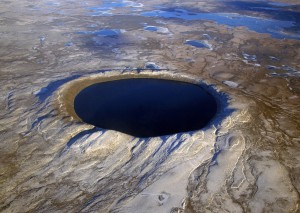 Sean Gulick, co-led of project has said that the purpose of this drilling is to restore the cross section of the earth that starts from the center of the crater in the Yucatan Peninsula. The research team plans to study rock samples to determine the actual process of the evolution of life on earth and also the process of formation of the crater.

Group of team plans to use the rock samples thus procured by drilling to know more about the evolution of life on earth and the formation process of impact craters.

Said Gulick, “[The crater] is the only impact crater linked to a mass extinction event — therefore, it is an incredible opportunity to study how life recovered after the mass extinction. We can see the way impact craters look on other planets, but on Earth we can collect the samples and figure out fundamental things about the process that makes them possible.”

By drilling a 5,000 feet (1,500 meter) deep hole into the crater, the researchers will be able to bring up its giant core- and delve 10 million to 15 million years into the past.

Gail Christeson, senior research scientist, explained why the drilling is being proposed. “I have been involved in studying the crater for 20 years and it has been a very large effort involving universities from all over the world. We can image the crater really well using geophysical techniques, but we do not actually have samples of what we are imaging. That is what the drilling will do.”

Half of the core thus drilled will be stored at a repository at Texas A&M University for future research needs and the other half will be sent be analyzed by an international tea comprising of geologists in Germany.

This latest effort to know more about the gigantic crater in Mexico is a $10 million project and will be headed by Gulick and Joanna Morgan, both from Imperial College, London.