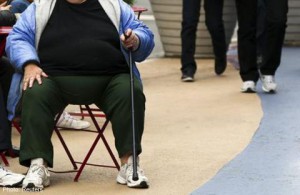 On the other end of the scale, however, being underweight in the 40-55 age bracket was associated with a higher risk, the researchers found.

While admitting they were “surprised” by the potential protective effect of obesity, the team cautioned against jumping to conclusions.

The reasons for the observed association were not known, they wrote in the journal The Lancet Diabetes & Endocrinology.

“The message that people shouldn’t take away is that it’s OK to be overweight or obese,” study co-author Nawab Qizilbash of the OXON Epidemiology research company told AFP by telephone from Madrid.

“We do know… that if you are overweight or obese you have a high risk of (early) death, so it is not clear that the net benefit on dementia would be positive.

“In other words, even if there were to be protective effects on dementia from being overweight or obese, you may not live long enough to get the benefit of it.”

But the widely-held belief that reducing obesity in middle age could help prevent dementia may also be ill-founded, said the team, and required a rethink of how we identify high-risk individuals.

The researchers combed a British database of patient information recorded from 1992 to 2007, representing some nine per cent of the UK population.

In what they claimed was the largest-ever study of any link between bodyweight and dementia risk, the team analysed the medical records of nearly two million 40-plussers.

WHO pointed out danger of Caesarean section without medical recommendations

WHO is supporting a Caesarean section, but when more and more unnecessary surgeries performed without …