Rosetta and Philae found Comet 67P is not magnetised 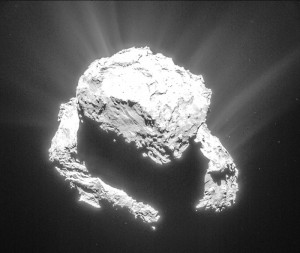 Rosetta and Philae has been taking measurements simultaneously when several probes landing occurred on Comet 67P / Churyumov-Gerasimenko. These measurements have shown clearly that the comet nucleus is not magnetized. Studying the nature of comets was able to give a lesson to us about the role of magnetic fields in the formation of the Solar System. As already known, the solar system is nothing more than a collection of gas and dust billions of years ago. In general, the core is sun and other materials that will be planets, comets, the moon, etc.

Dust containing iron in comet has been studied in sufficient quantities, and another fraction is containing enough magnetite. Magnetite mixed in some elements of pure iron was discovered and quite evenly so that attract the attention of scientists. Magnetite has been found in comets and it indicates the presence of this element in the early formation of the Solar System. This phenomenon is causing scientists agree that the magnetic field threading through the proto-planetary disks have played an important role in the movement of the material. It is not yet clear is how this magnetic field can clump together as building blocks before the force of gravity began to dominate the universe.

Theories about dust particle in the term of aggregation magnetic and non-magnetic can explain that larger objects can be influenced by magnetic fields emanated from smaller objects, in this case is the proto-planetary disk. Initial laboratory as a term commonly used by scientists, can be found in studies of the comet because a comet contains some of the most pristine material in the Solar System. Materials such as iron and magnetic deemed responsible for the movement of the masses turned out to have been stored in the comet in its pure form. By studying comets, scientists hope to learn more about our solar system.

NASA’s New Horizons have photographed Pluto on its journey

New Horizons, NASA’s spacecraft have photographed Pluto in the journey that passes through the small …